I know. The title of this recipe doesn’t exactly sound appetizing once you really think about it. Rhubarb? On flatbread? Eh?

I found this recipe in my recent issue of Better Homes and Gardens because rhubarb is in season right now. But their thinking is that there has to be more than just sweet dishes for this ingredient, so they did a feature on savory rhubarb recipes. This one, in particular, caught my eye.

We didn’t exactly love it. The recipe says to stick whole stalks of rhubarb on the flatbread and the stalks were just too thick and tart to be palatable.

HOWEVER, I think there’s some big highlights in this recipe which is why I’m posting it. First, we think that if we cut the rhubarb into tiny thin strips, it could be remarkably delicious. Second, the chive flatbread dough is AMAZING. We’re keeping this recipe around Casa de Youngren for this chive-infused dough alone. It’s un-freakin-believable! So I say that you should take a stab at this flatbread too – I think the unique-ness plus the delicious dough makes the afternoon of kitchen fun worth it!

Grab some sticks of rhubarb, a bunch of chives, and the usual ingredients for flatbread dough. Plus, you’ll need some honey to drizzle on just after it comes out of the oven. 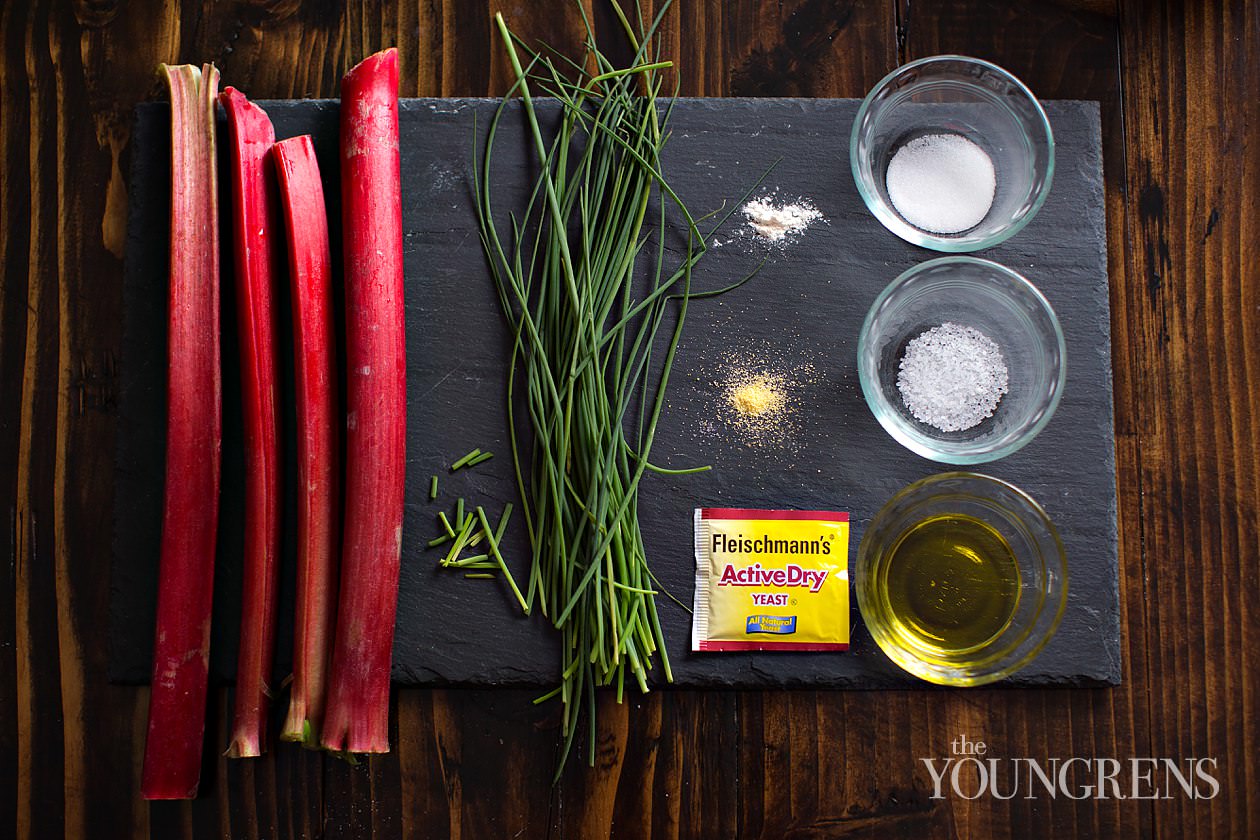 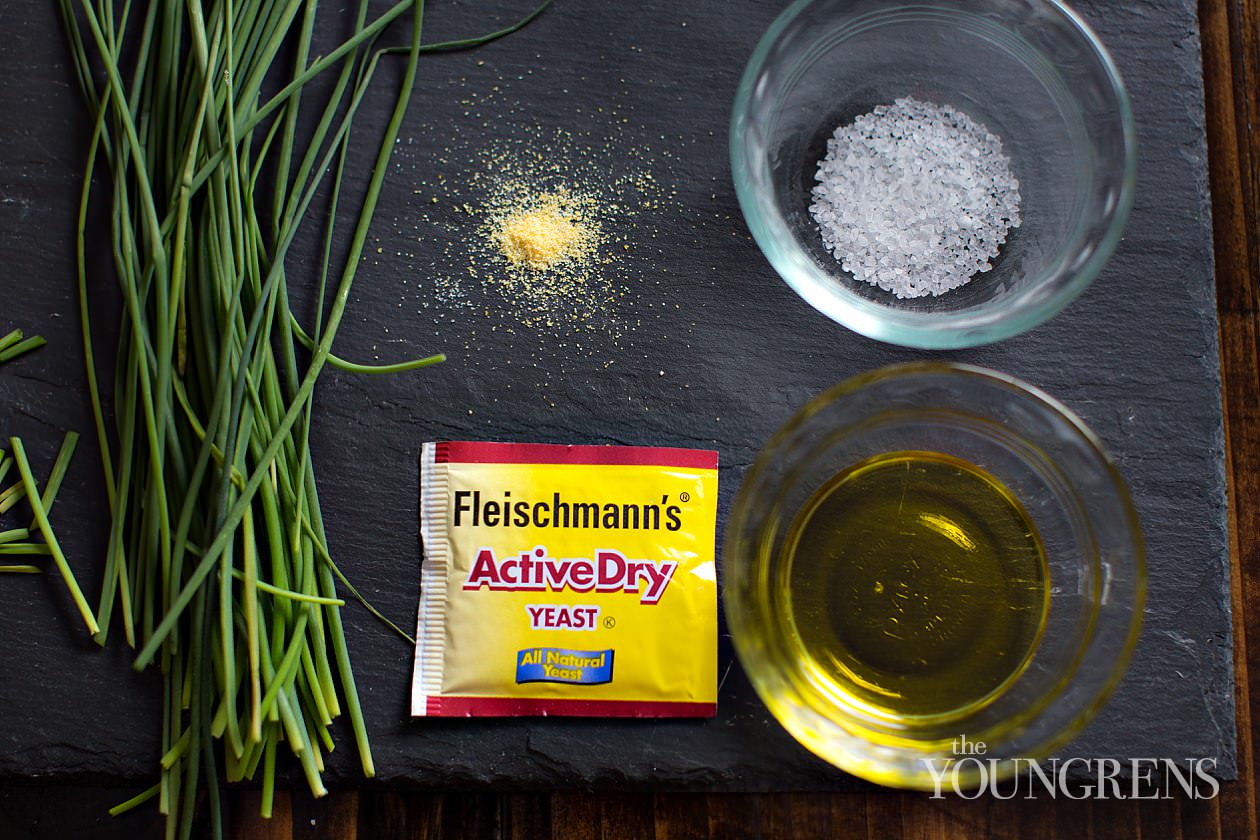 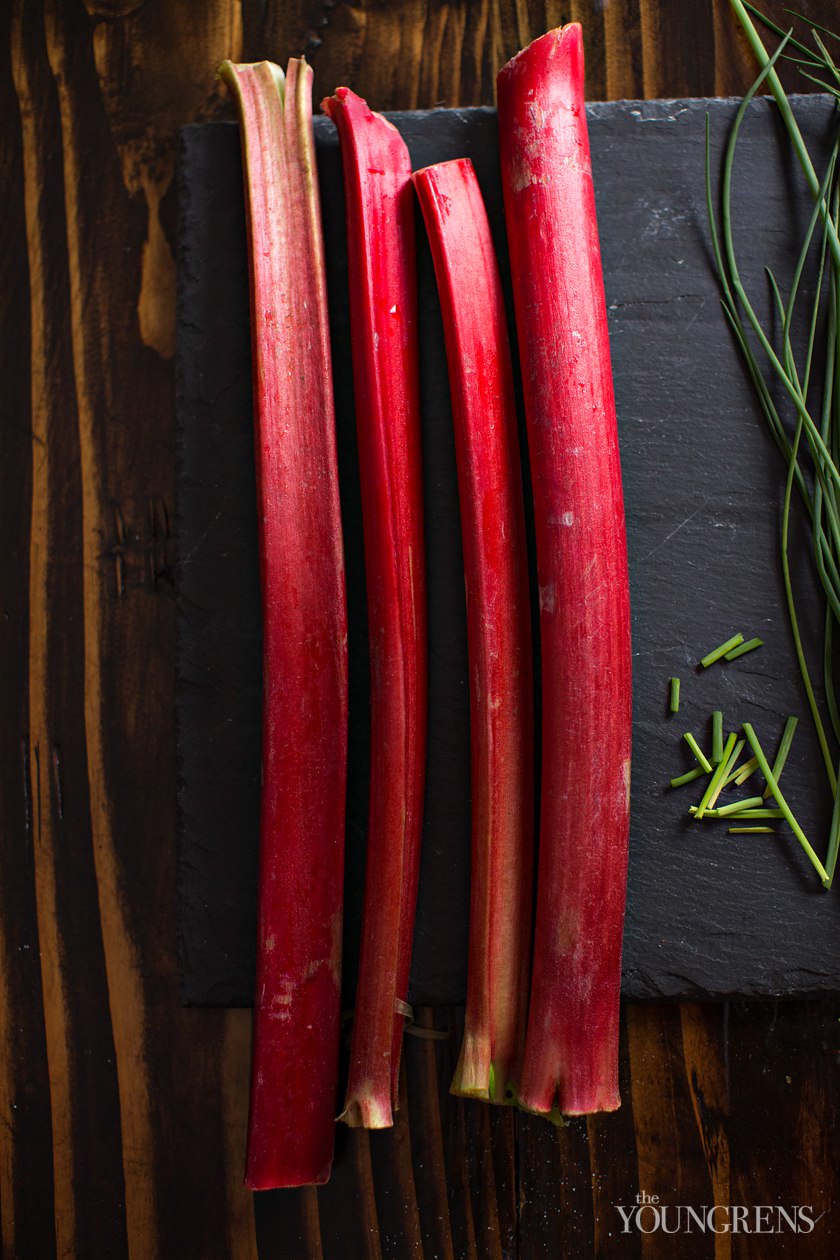 First, prep your yeast by sprinkling it into warm water – between 105 and 115 degrees F. You’ll want the yeast to become foamy and the warm temperature is important. 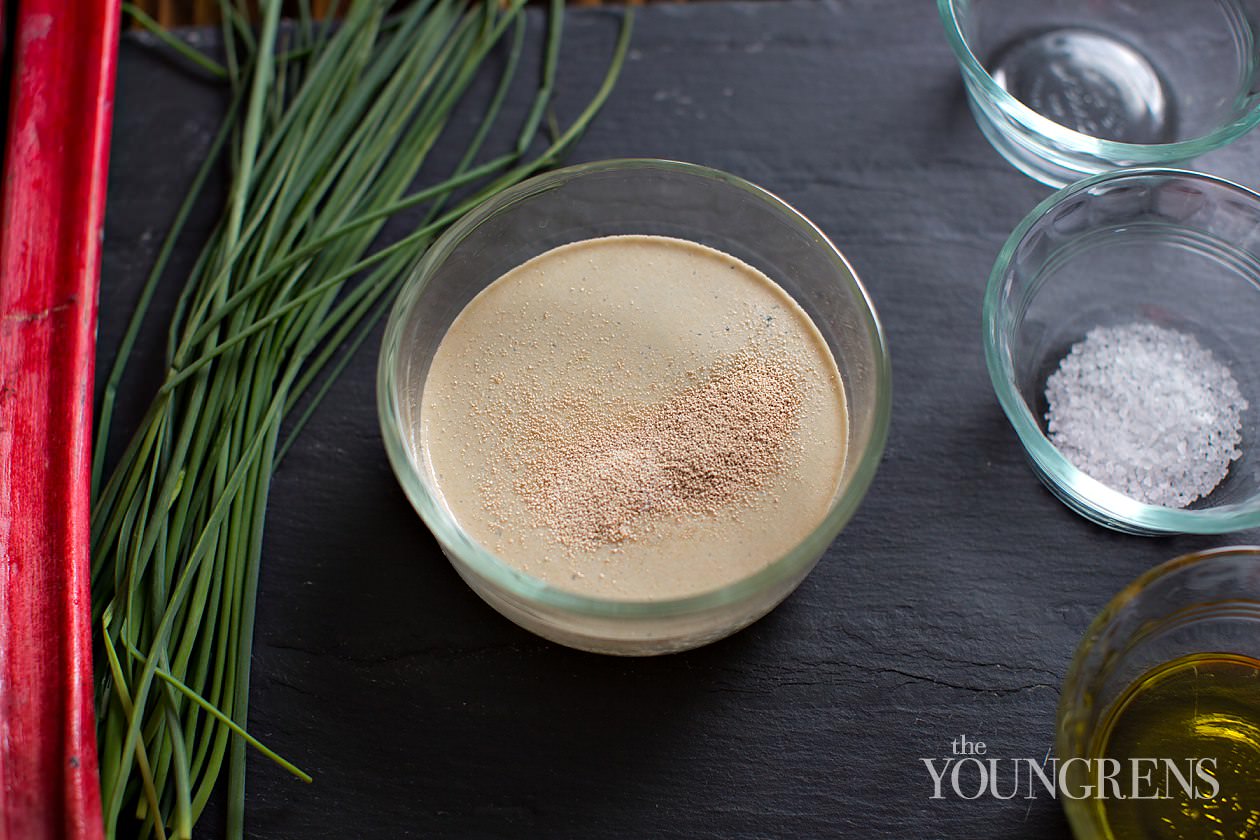 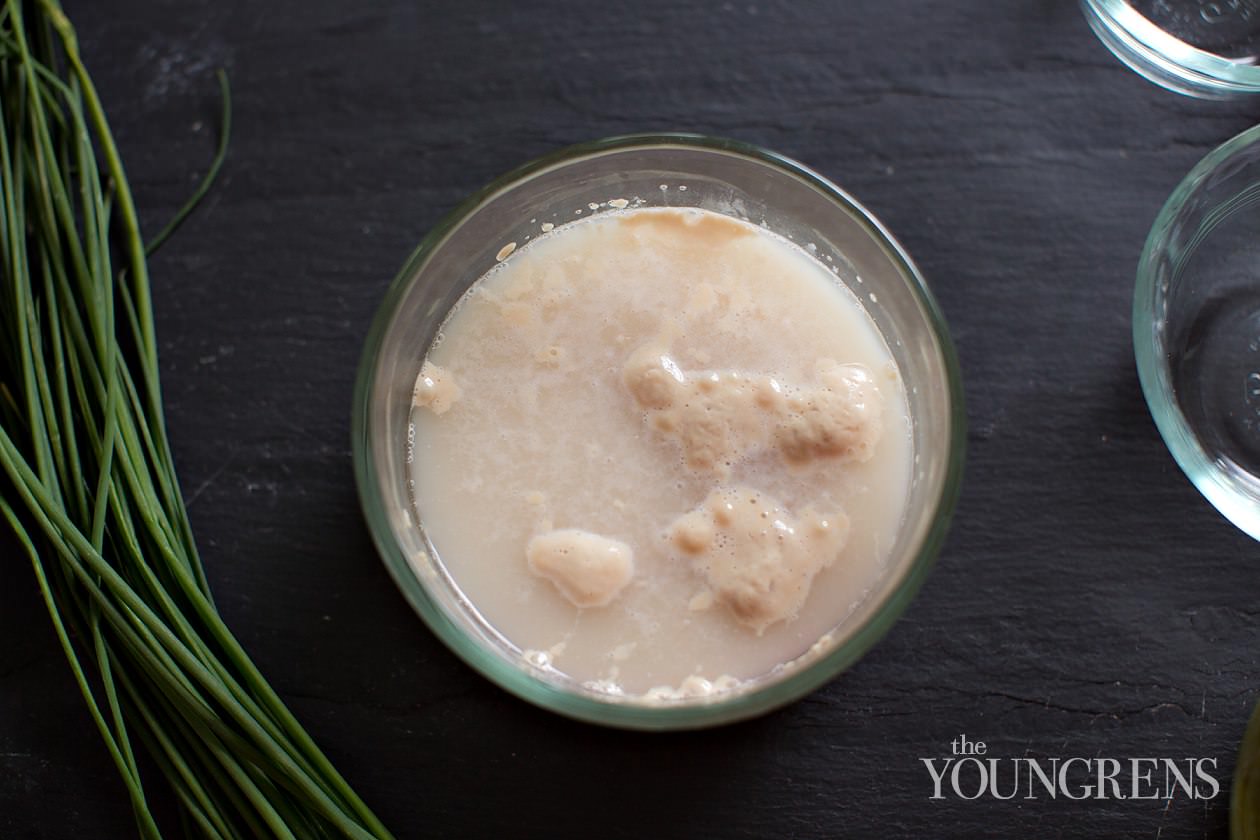 Then snip your chives (I like to use kitchen shears) into small pieces. 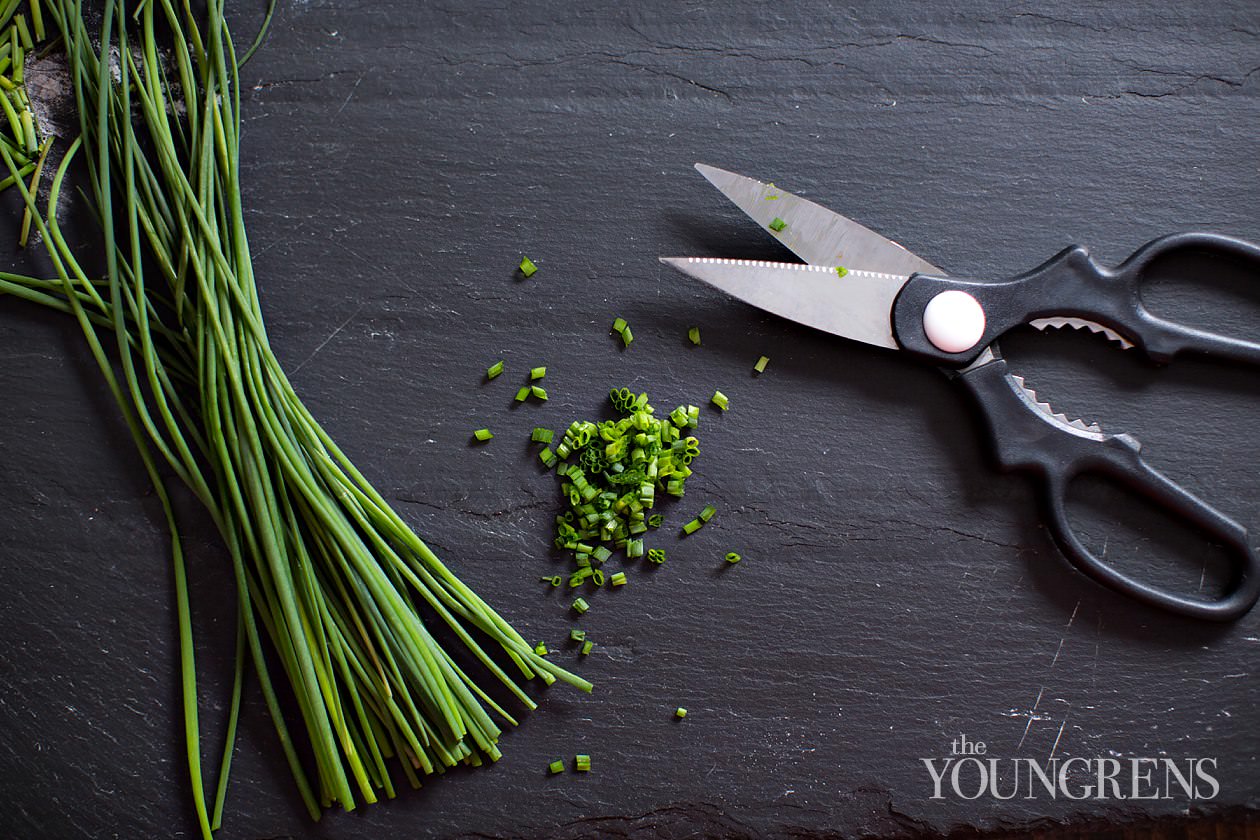 Combine all of the dough ingredients in a large bowl until it sticks together. 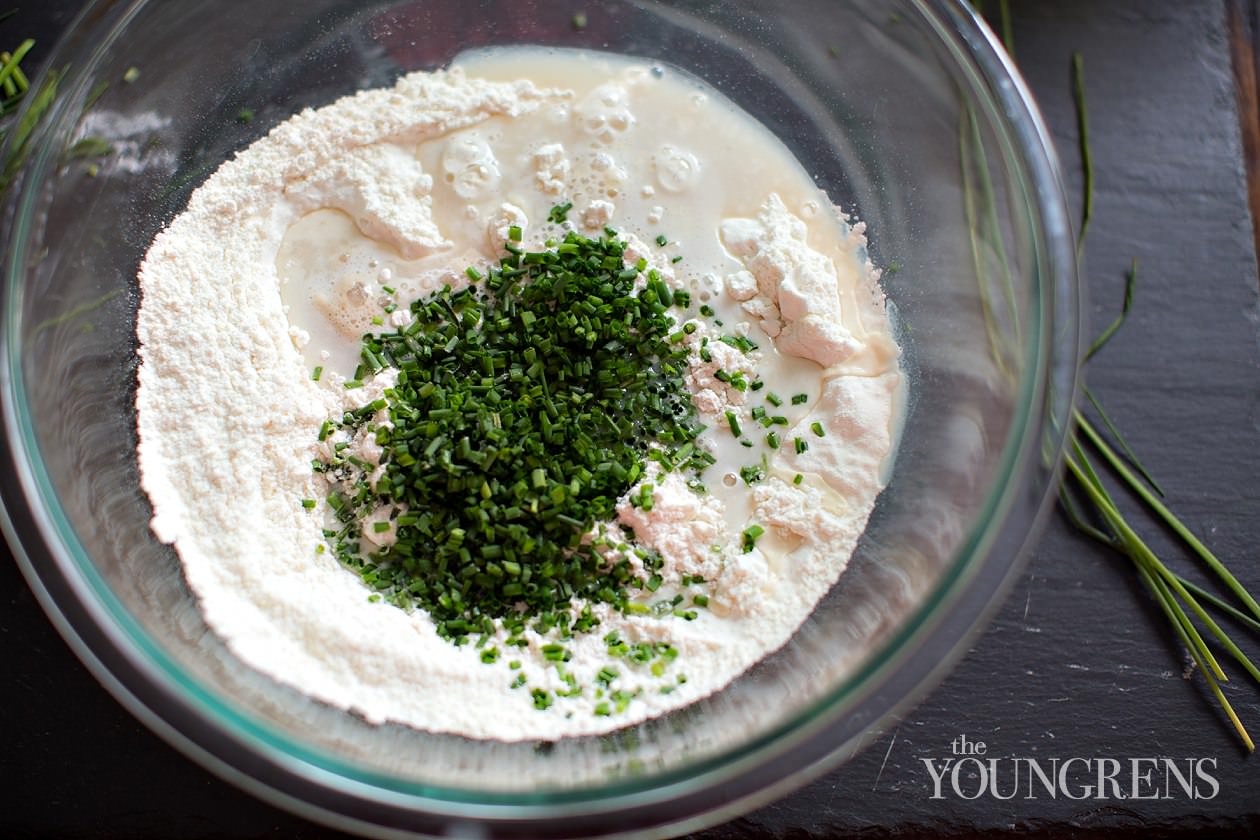 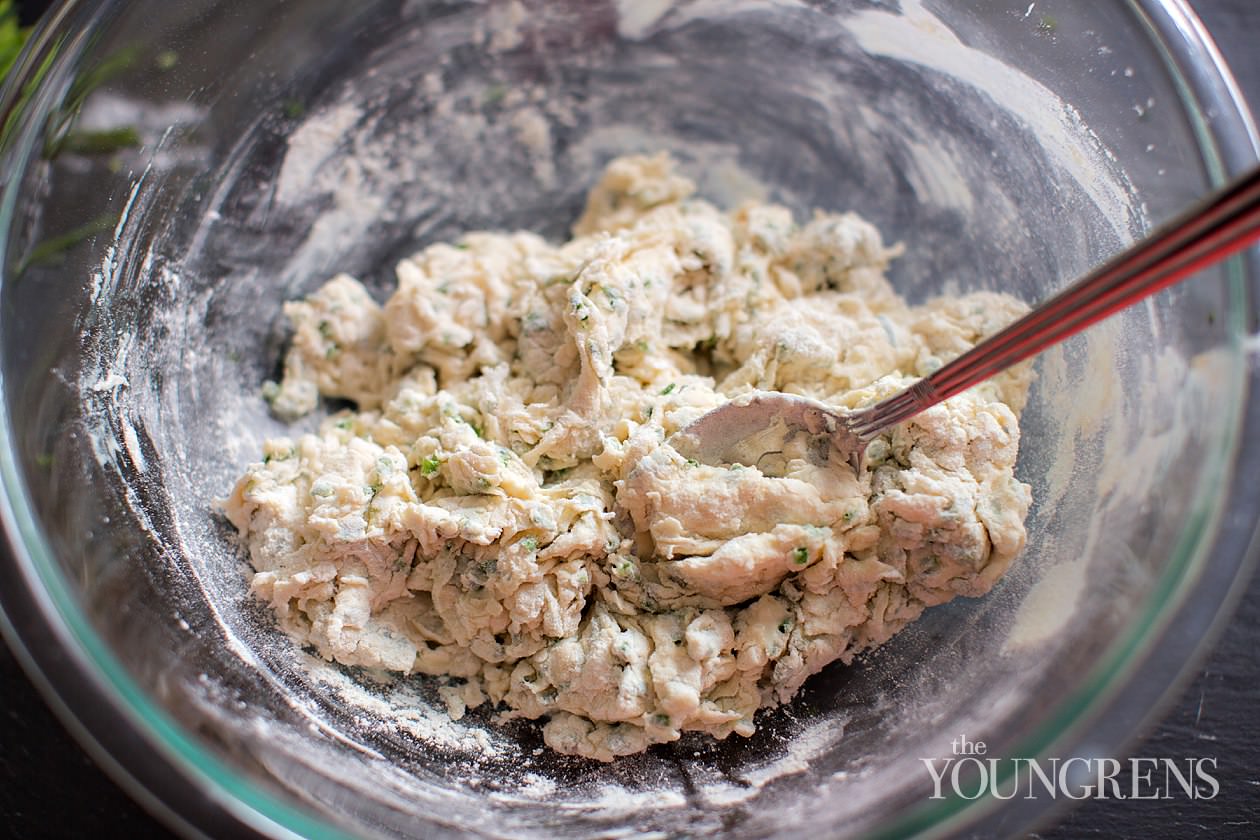 Then transfer the ball of dough to a floured surface and knead for a few minutes until it’s smooth. 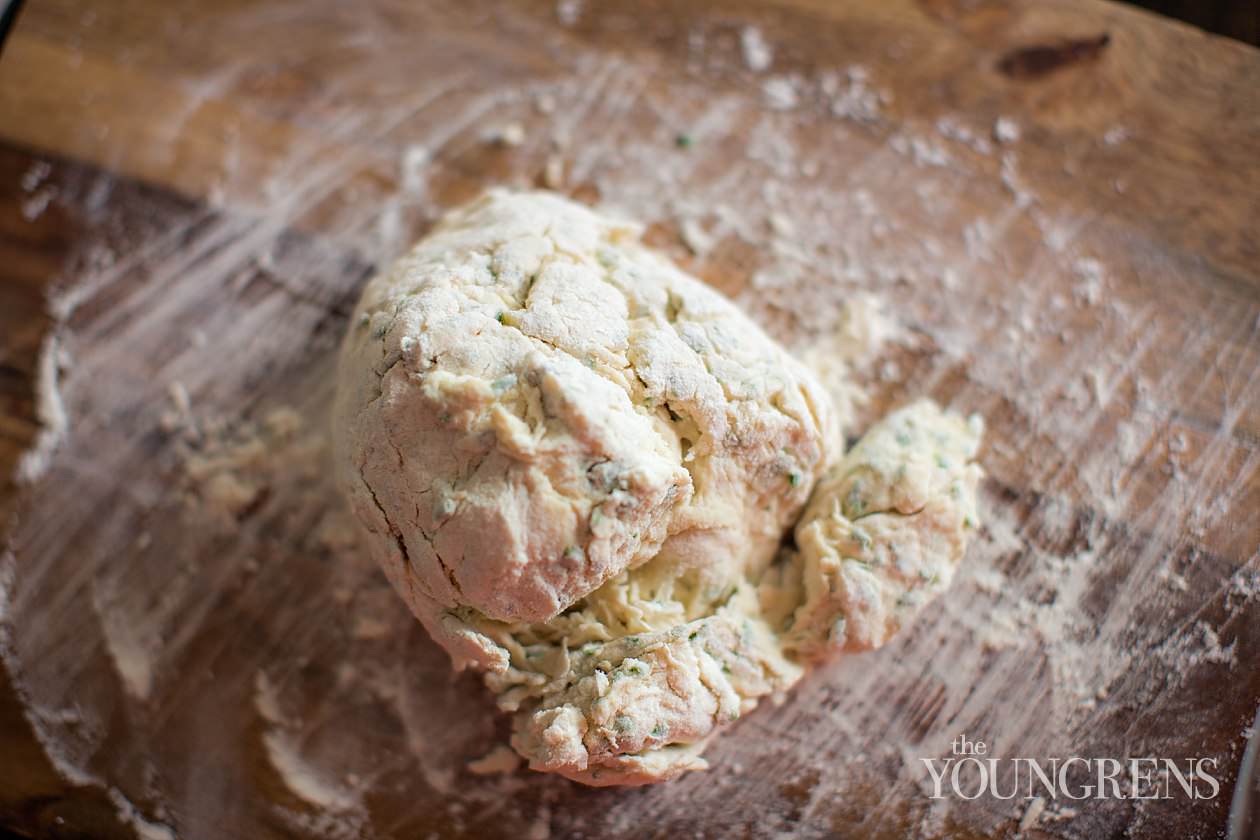 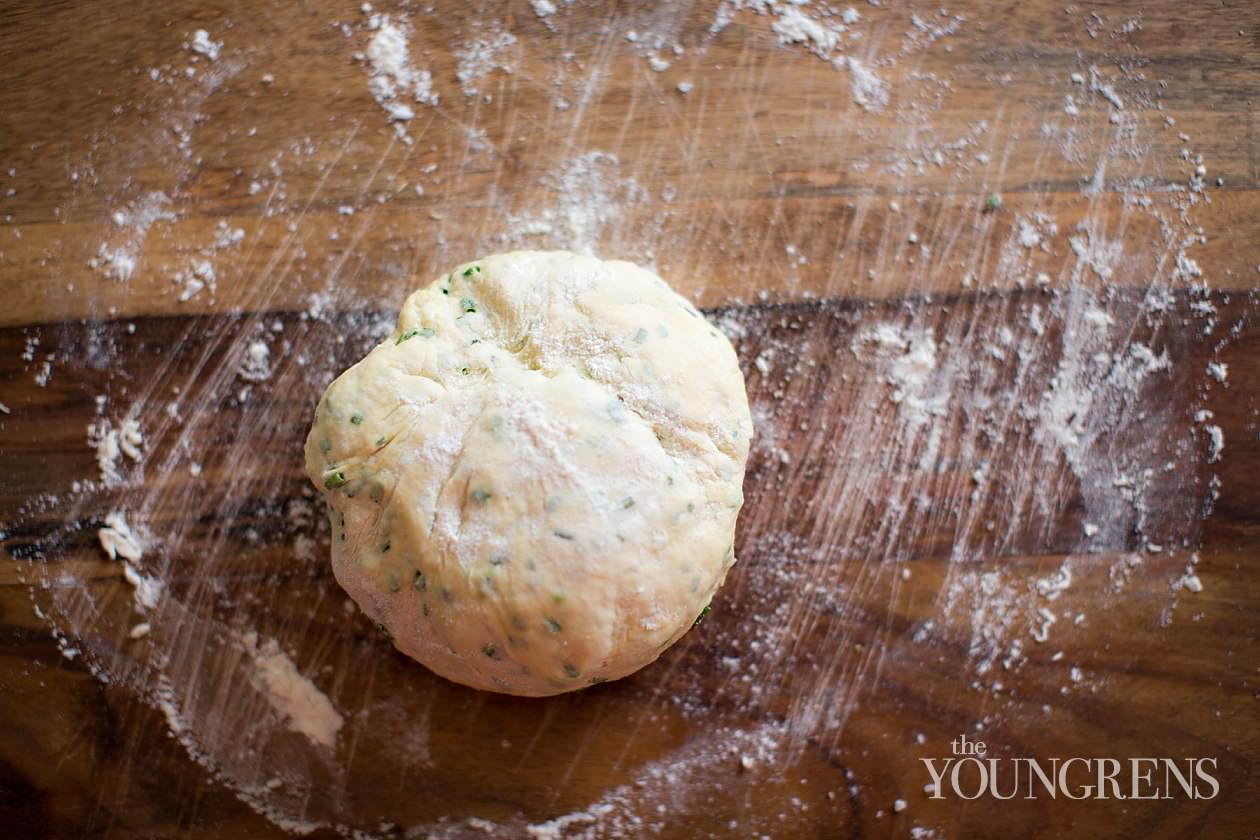 Lightly coat the bowl with oil, then turn the dough a few times inside to coat it. Then let it rise in a warm (not hot) place for 30 minutes. It should double in size. 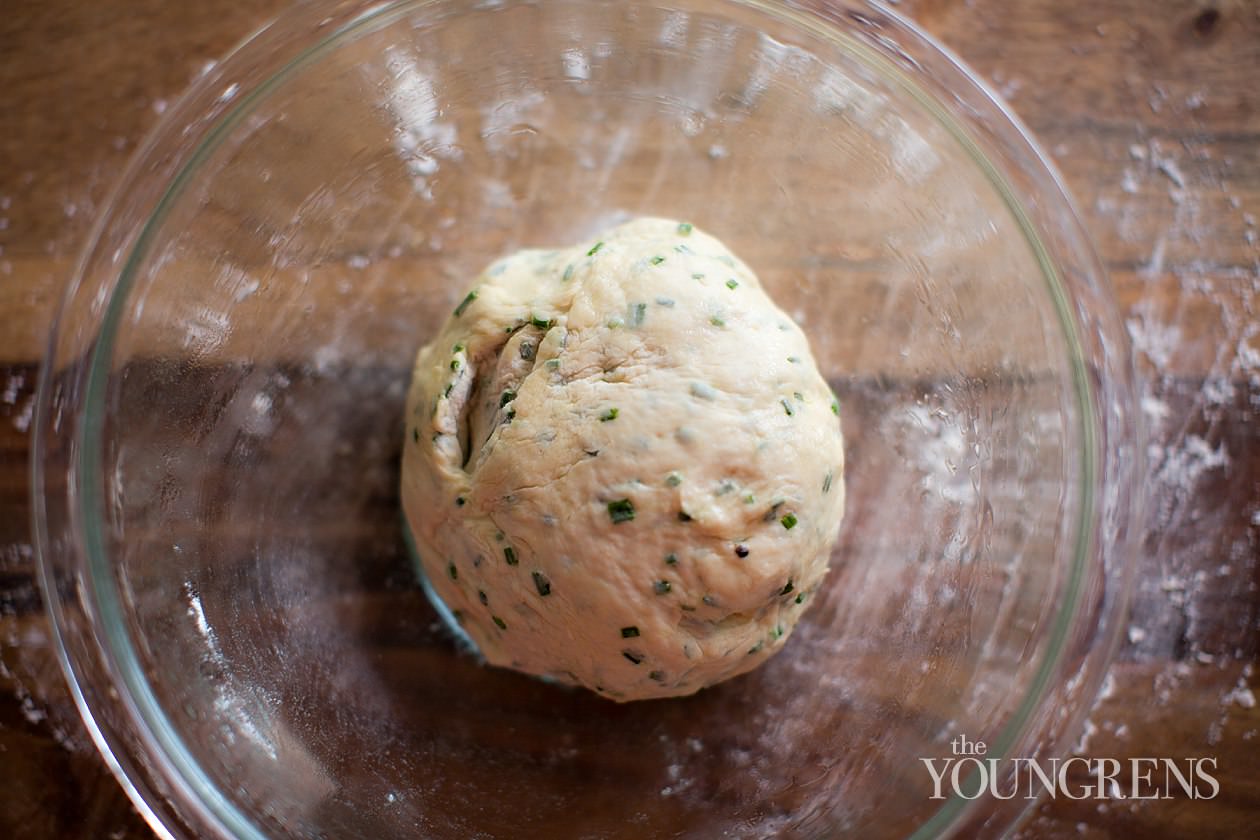 Once the dough has risen, stick your fist in flour, then punch the dough down. This is my favorite part! 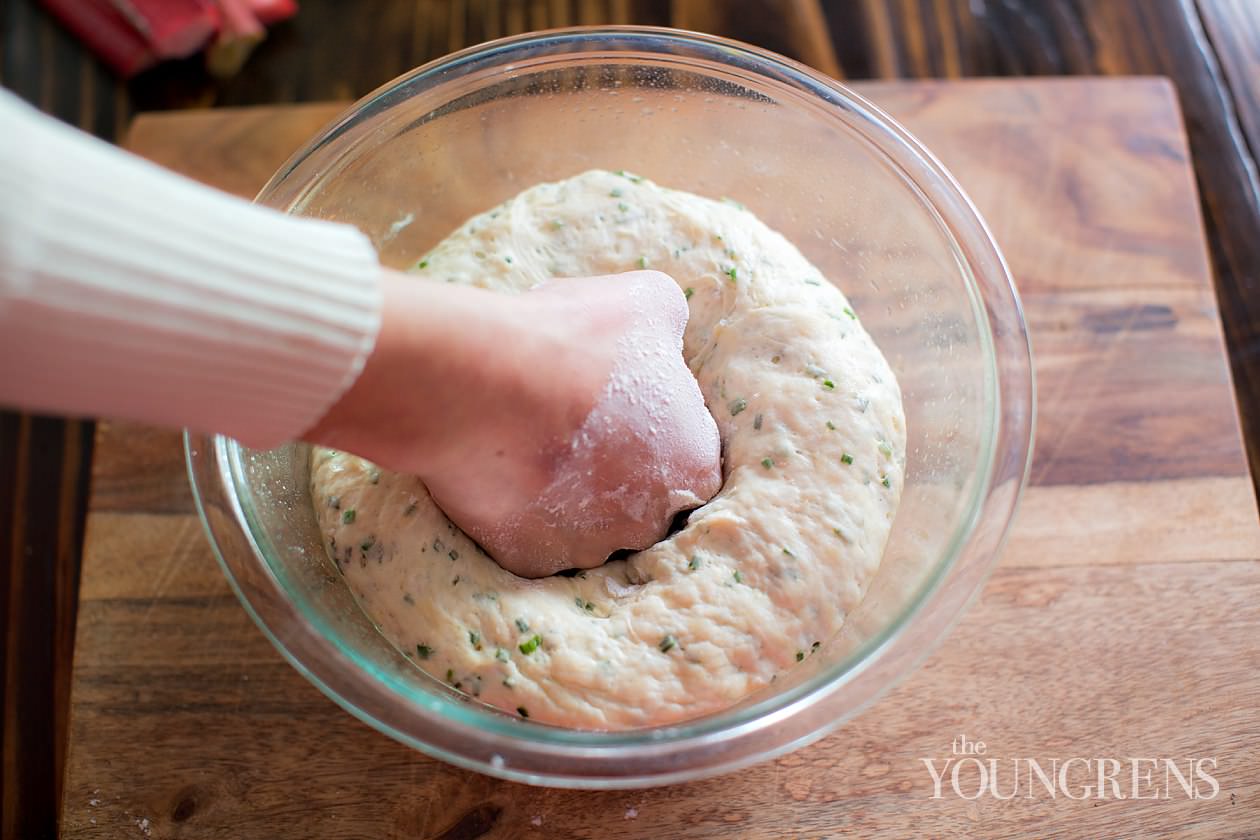 Preheat your oven, then cut the dough in half and roll it out to a 12×4 inch rectangle – flat bread size. 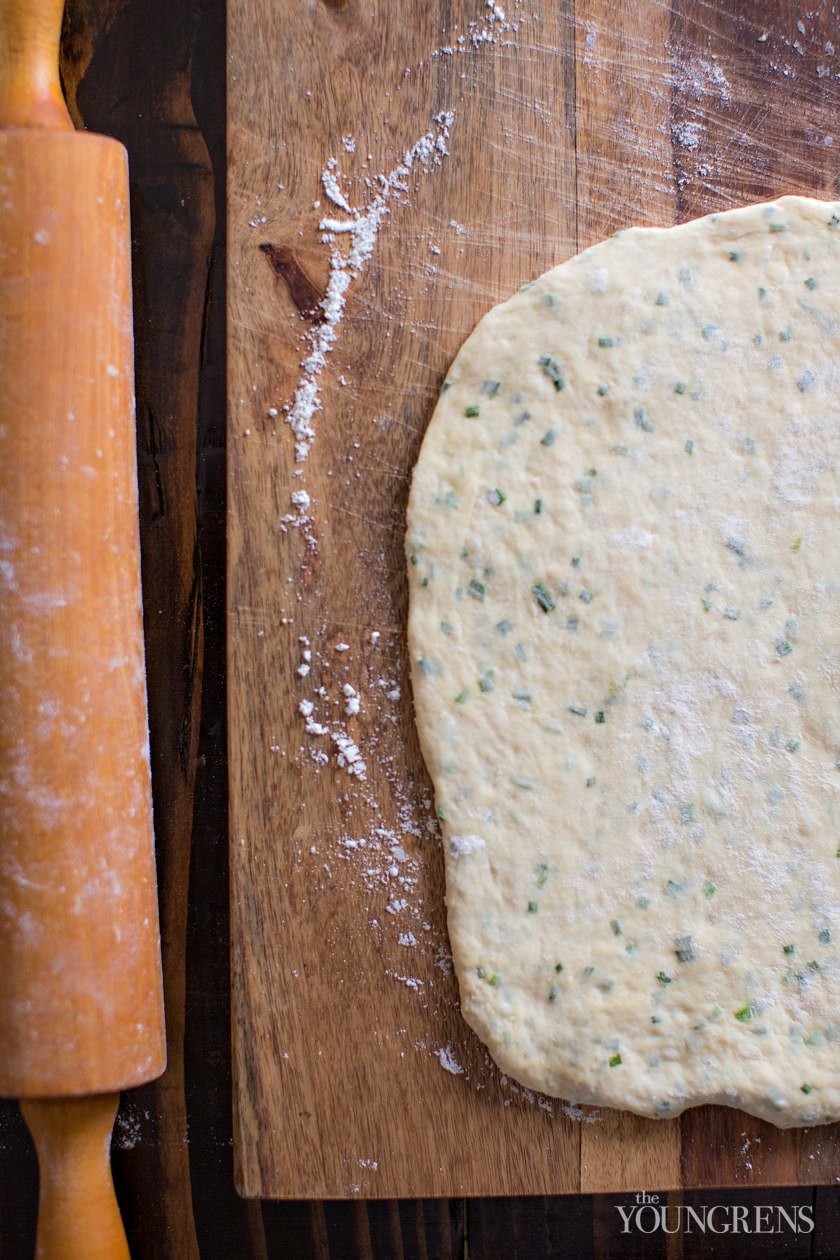 Carefully transfer the dough to a baking sheet that you’ve sprinkled with cornmeal, then press the rhubarb stalks into the dough. Again, we didn’t slice them up here – we did exactly what the recipe called for with the stalks intact, but I would thinly slice the rhubarb. 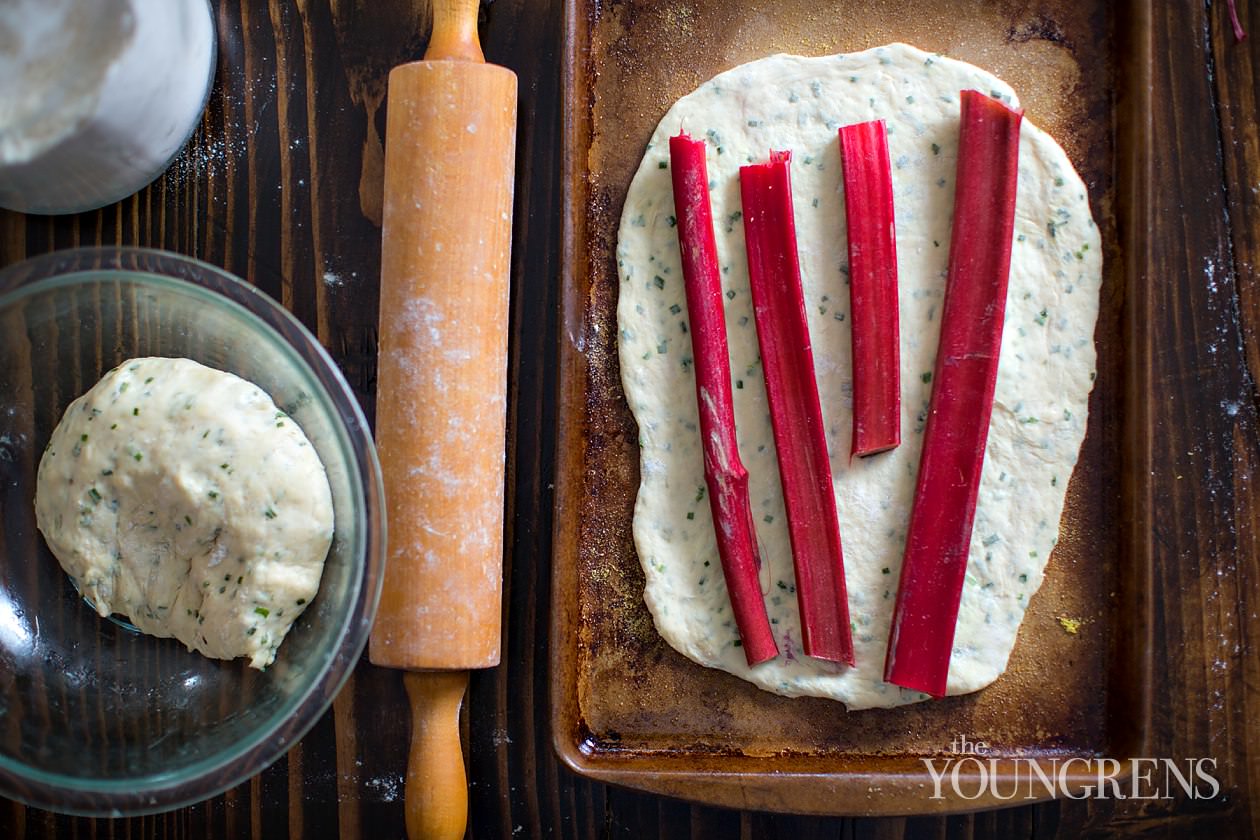 Brush with olive, sprinkle with salt, and bake until the dough is golden and crisp. Then drizzle with honey while it’s still warm and serve. 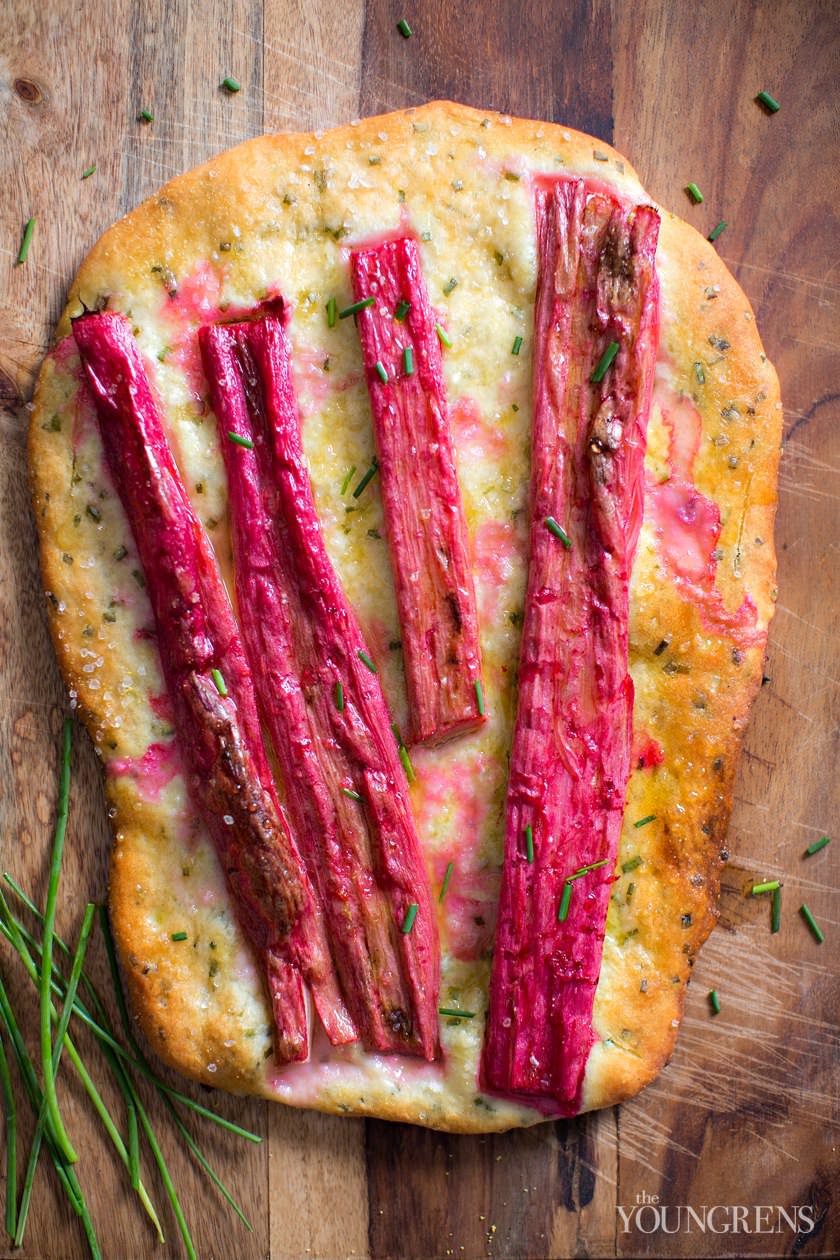 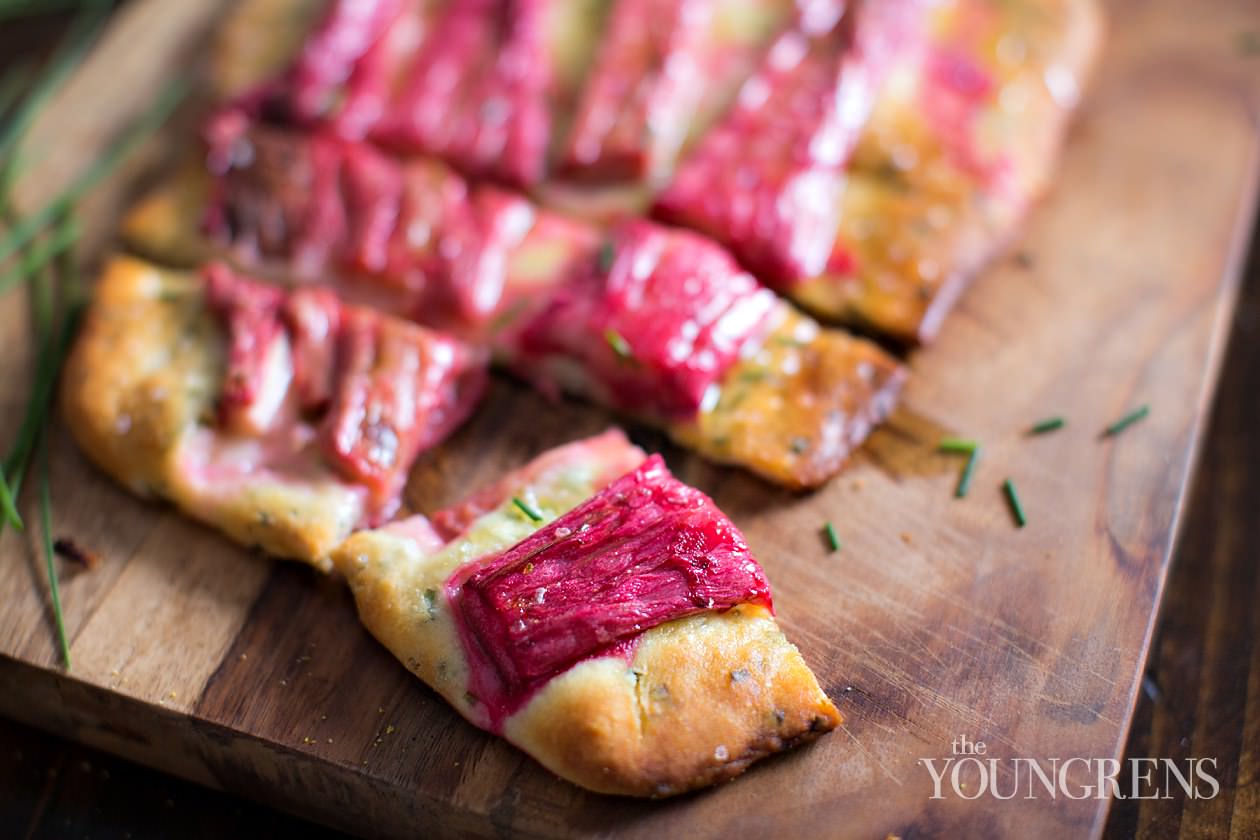 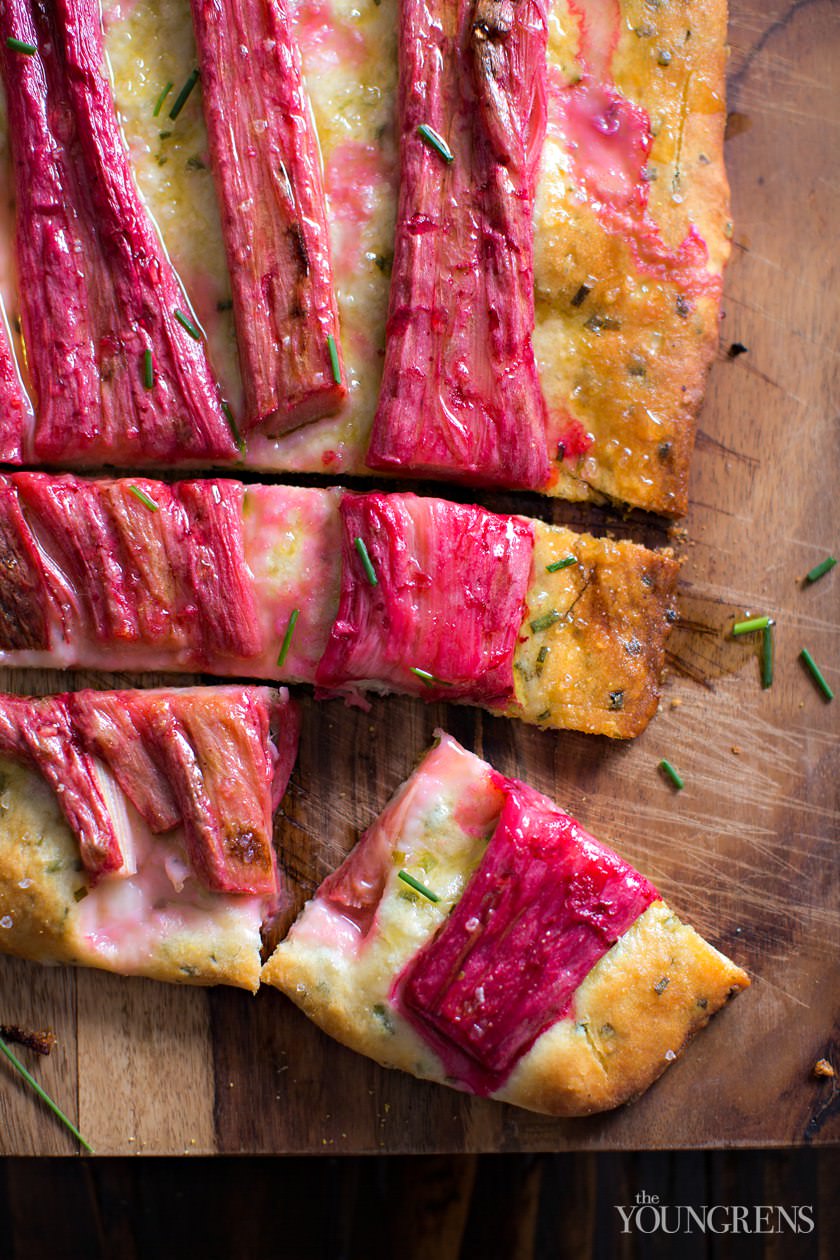 Like I said, we loved the chive dough so much that we made some extra flatbreads. My hubby, of course, made his personal favorite… 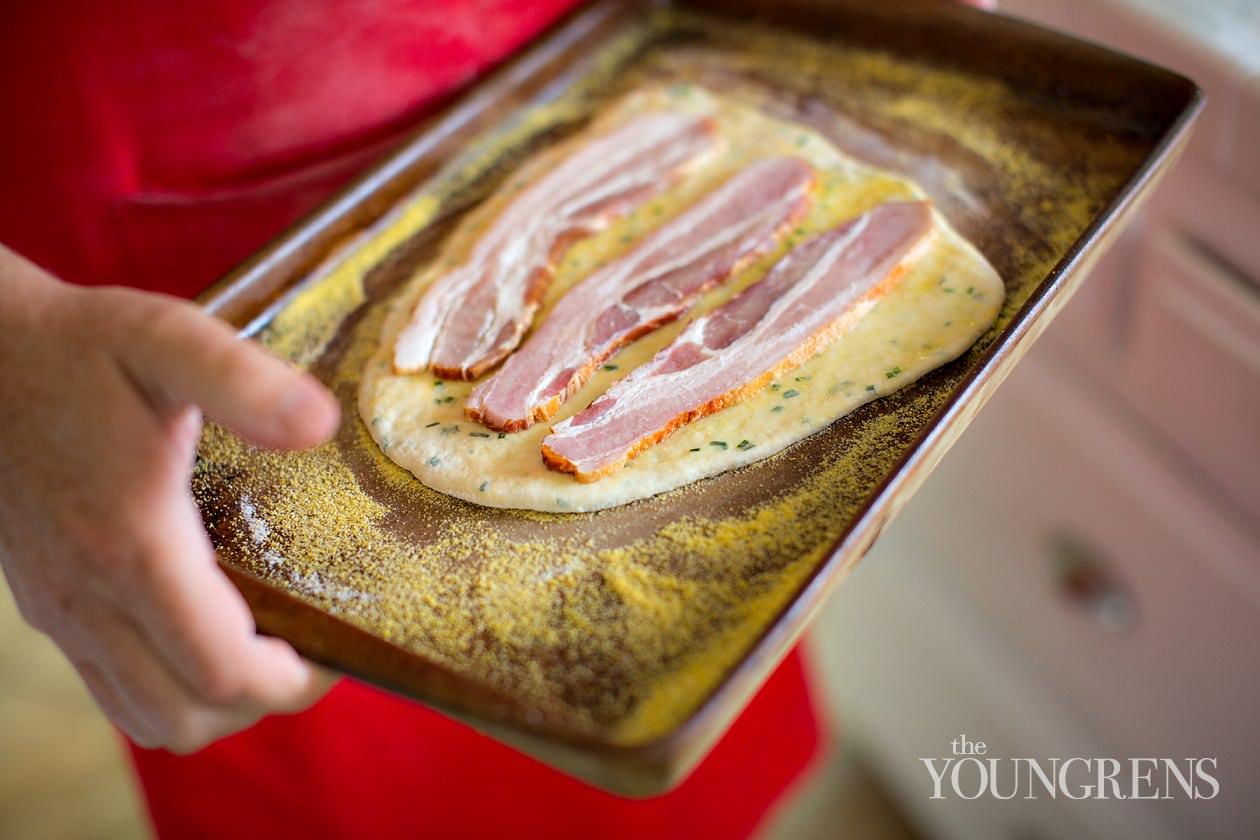