They’re finally ready!! I know that there have been at least two or three people (and yes, that includes our moms) that have been waiting ever so patiently to see the images from our Honeymoon Shoot in Venice, Italy. It has been the craziest two months of our lives, so I apologize that its taken a few weeks to process the beautiful mountain of images from our Italy trip in January. It has been such a blessing working through these images and we want to thank everybody that was a part of it – especially our gorgeous couple, John and Christie, who took a chance on a dream and asked us to come with them on their honeymoon! These two are beautiful visionaries and they realized that anything is possible – you just have to ask Jeff and Erin and make it happen! Thank you!

Now I know what you may be wondering, because the biggest response we’ve gotten when we tell people about our Honeymoon Shoot is, “Really? They wanted you to come on their honeymoon? Awkward!!” I always giggle when we get that response because, yes, it isn’t your typical photo shoot. But here’s the thing: John and Christie honeymooned in Venice for ten days, and we were with them for four of those ten, meeting up for photo shoots off and on throughout that time. And since we’ve grown to be good friends with these two (which is typical for us, we have the best couples!!), we got to share the experience of cool restaurants,  amazing museums, and wandering canals with another couple that loves each other as much we do. Besides, Christie got to run around in her wedding dress in Venice – need I say more?

But enough of my blabbering, on to the images!

***Since Venice is one of those places that is beautiful around every corner, and since we did about 4 or 5 shoots total in Venice (not including all of our personal photography from our two weeks in Tuscany and Rome), we will be spreading out our Italy blog posts over the next couple of weeks. This will be the first installment of many!***

We began our time in John and Christie’s romantic hotel room at Hotel Concordia. This is the only hotel that overlooks St. Mark’s Square and they stayed in one of only a handful of rooms with the view!! 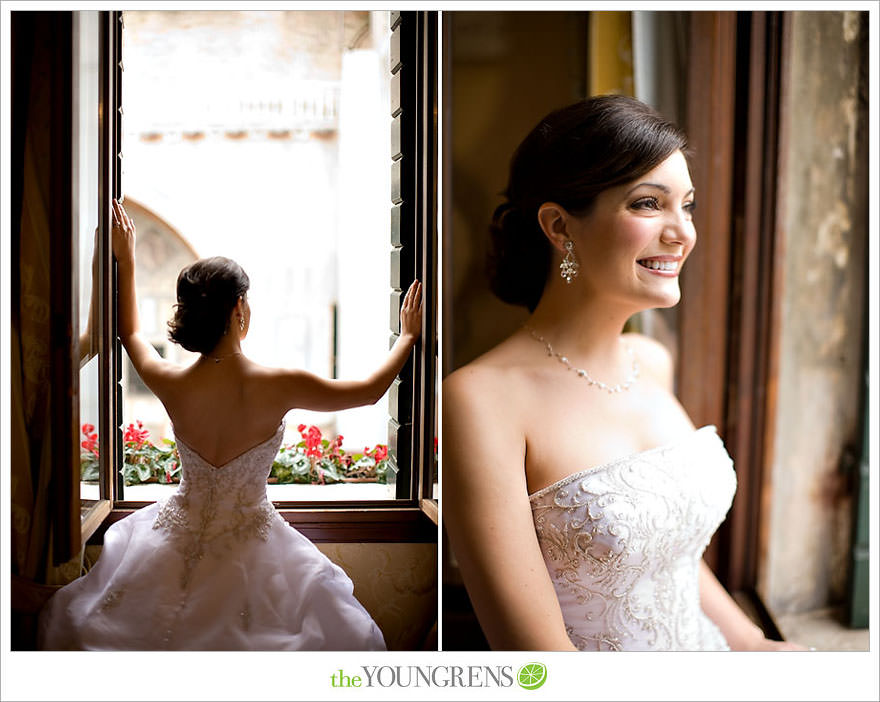 Most of our time in Venice was overcast or rainy, but on the second day God parted the clouds and revealed the warmest sunshine we had ever experienced! It was phenomenal! 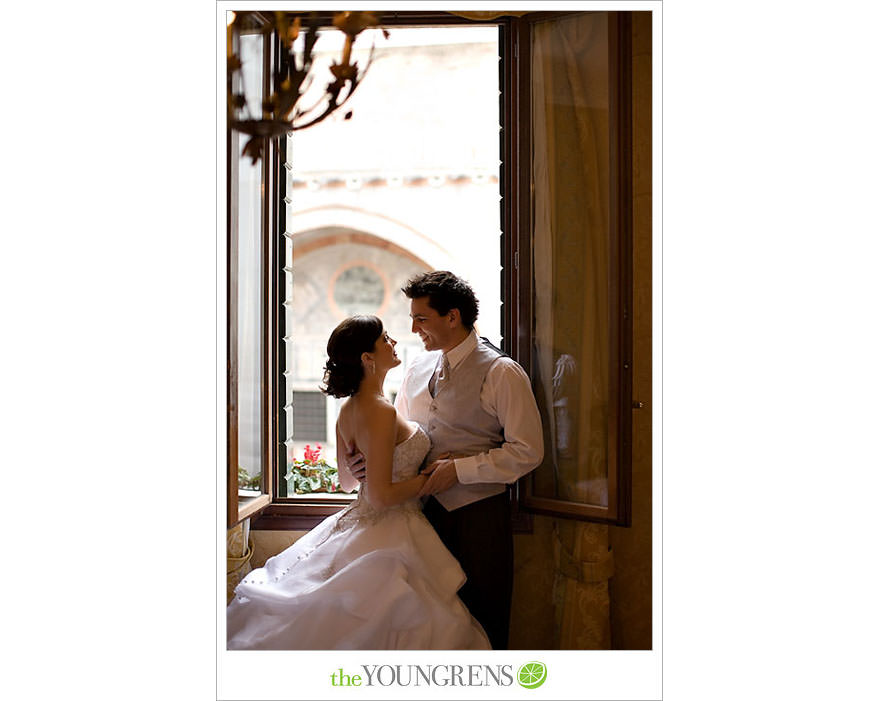 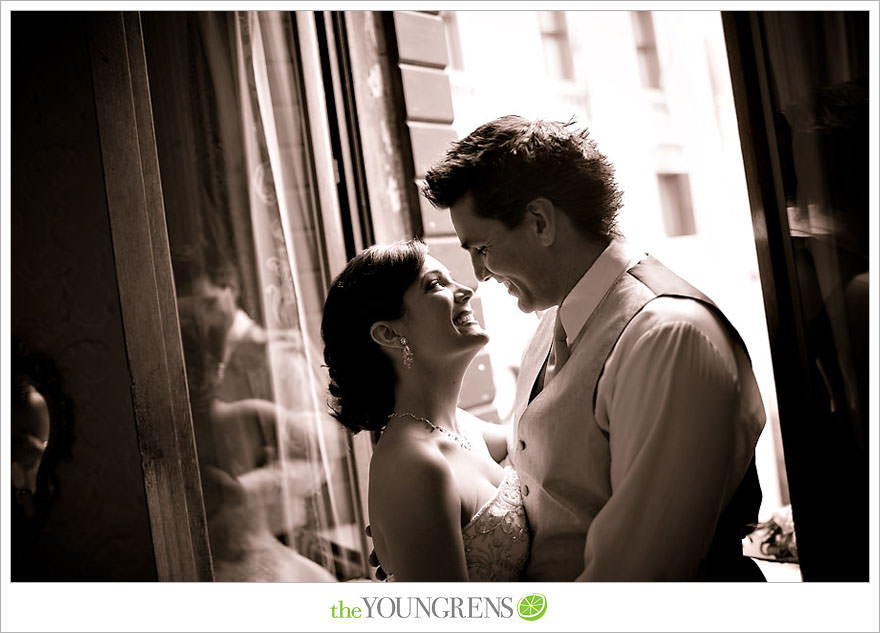 Gotta have fun in your dress and tux!! 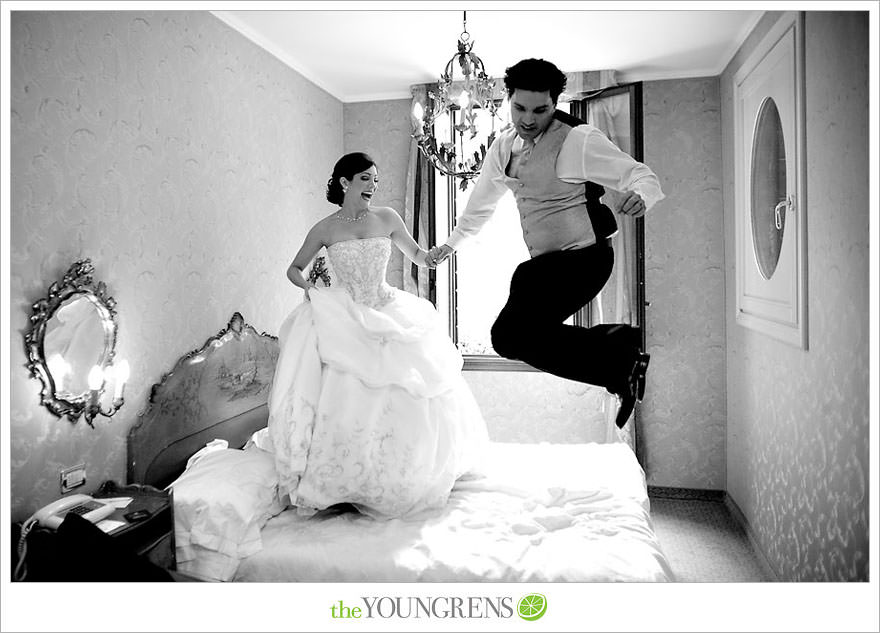 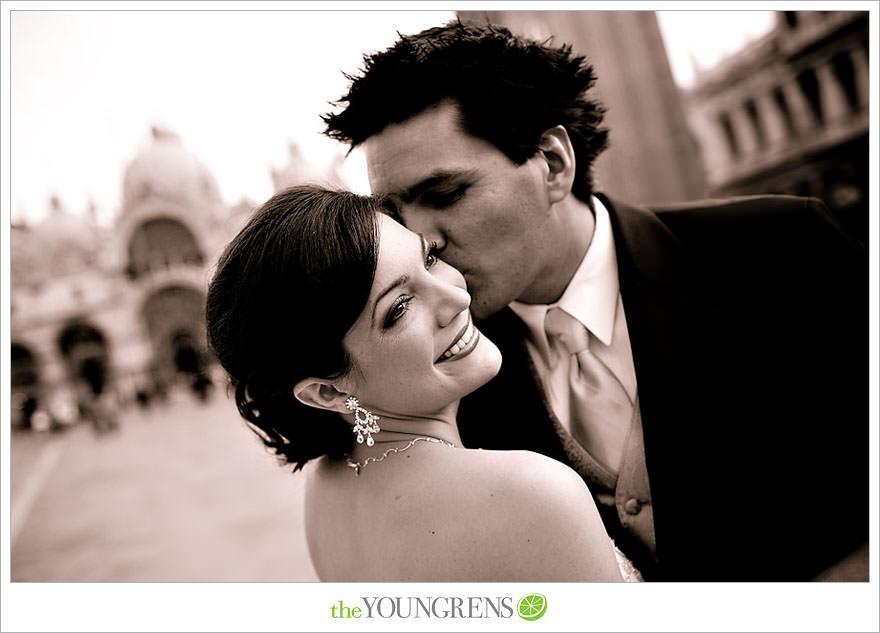 Not only was it enormously cold in January in Venice, but the normally crowded, elbow to elbow city was eerily empty of any tourists! We could wander the streets without seeing any tourists at all. But when we brought Christie out into St. Mark’s Square,  a number of tour groups that streamed out of the woodworks and became mesmerized by what we were doing! So here I am moving the crowds out of the shot. Go me! 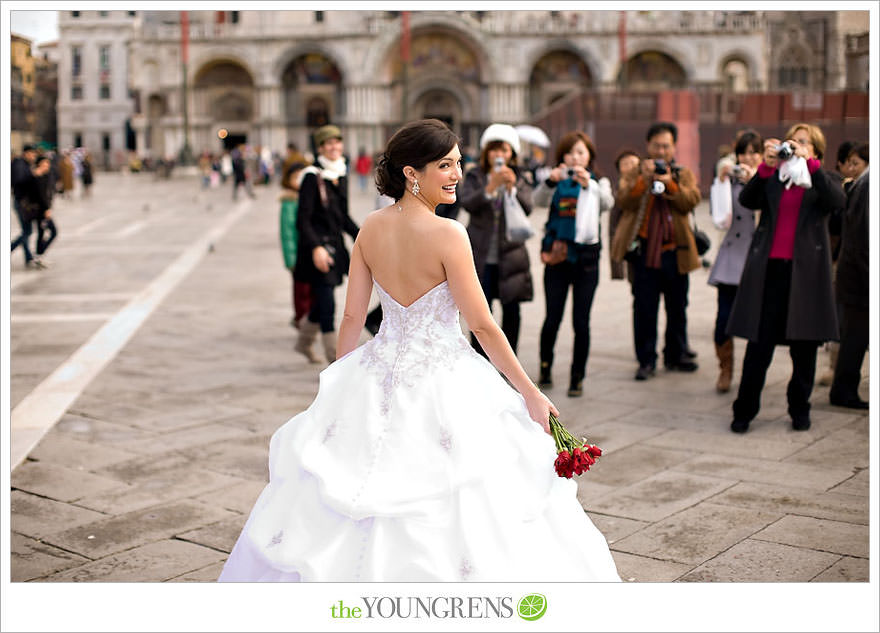 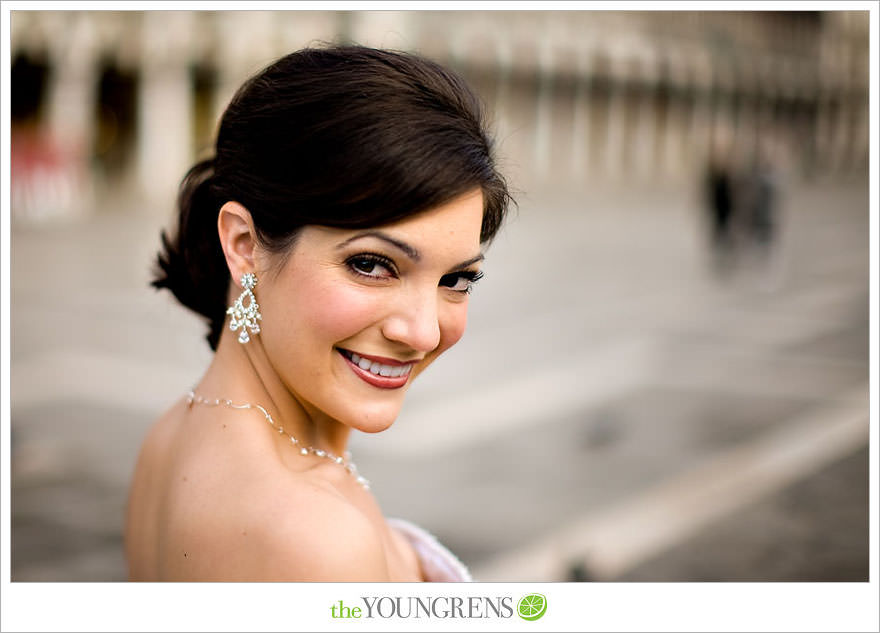 John is such a stud. 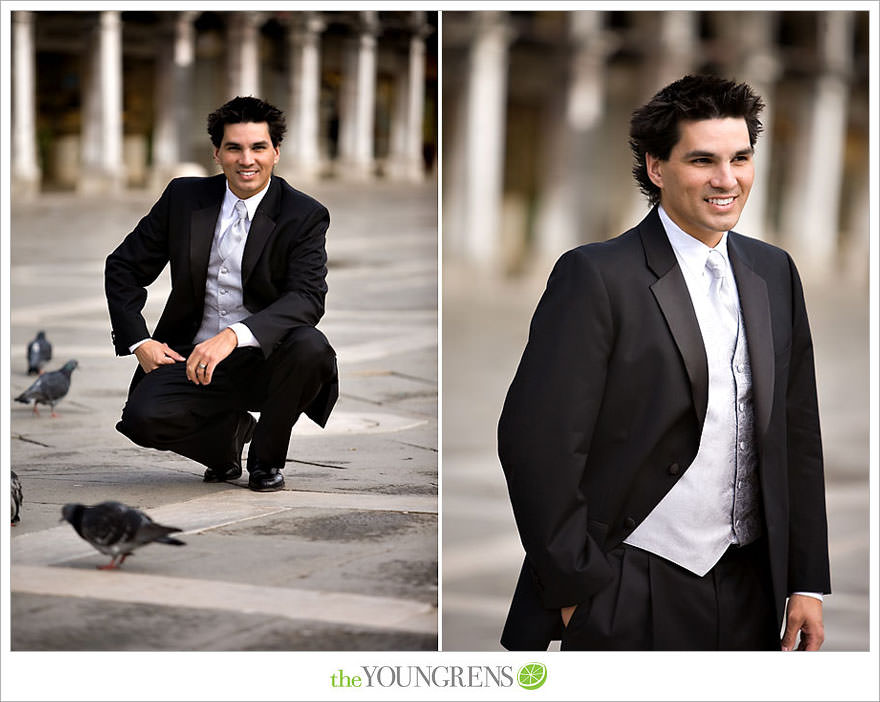 FAVORITE SHOT EVER! If you ever doubt a Honeymoon Shoot again, just imagine twirling in your dress in St. Mark’s Square with no one around! Absolutely gorgeous! 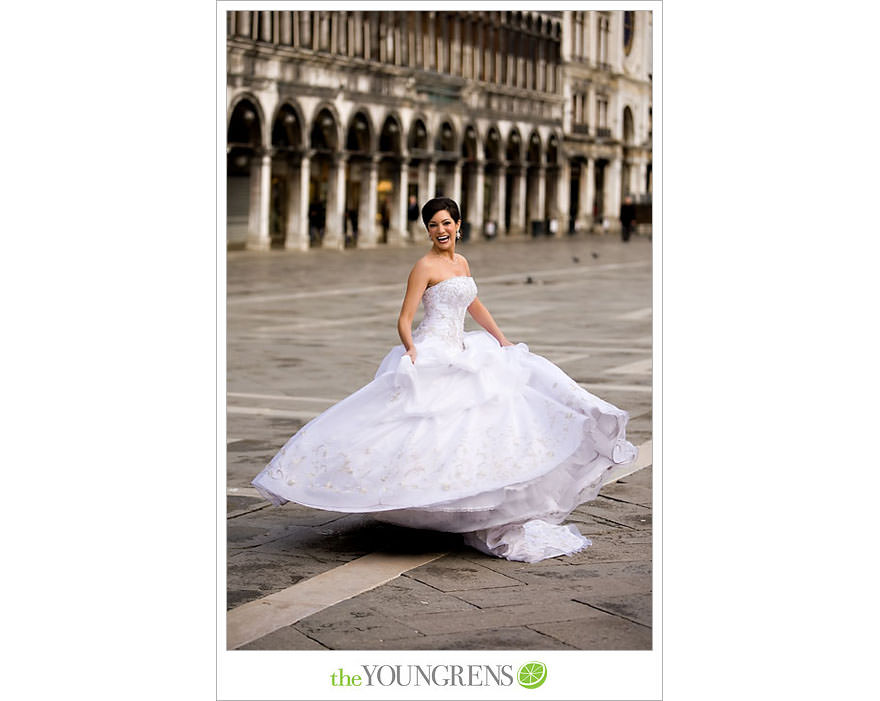 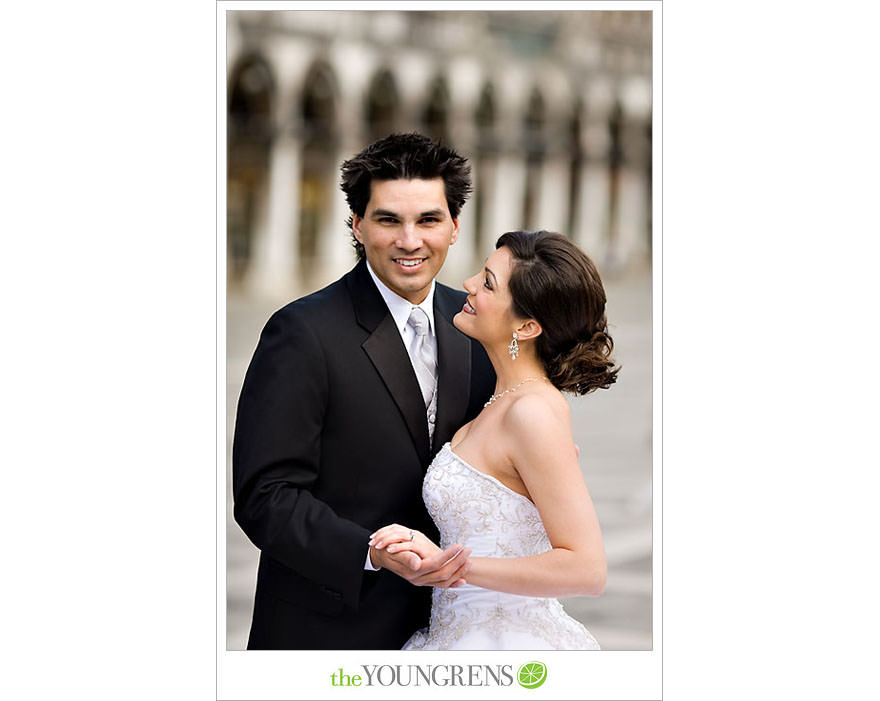 We then moved on to the utterly breathtaking maze of bridges and canals throughout the city. 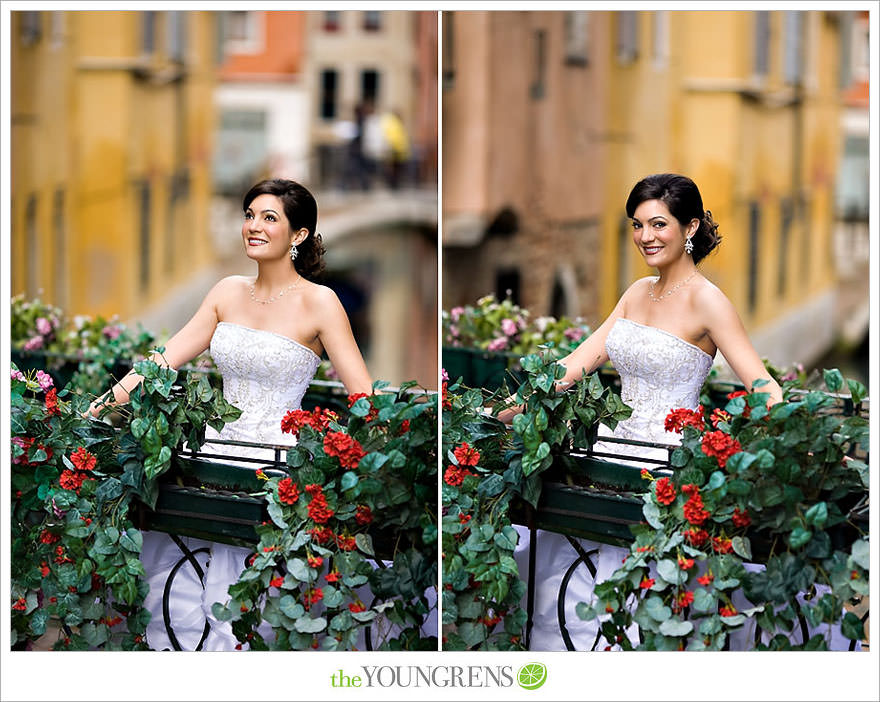 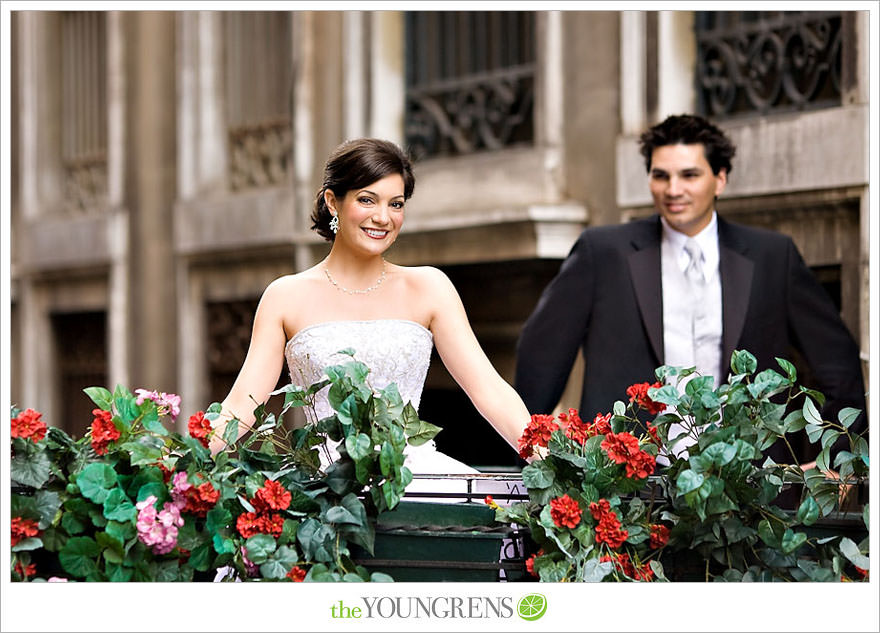 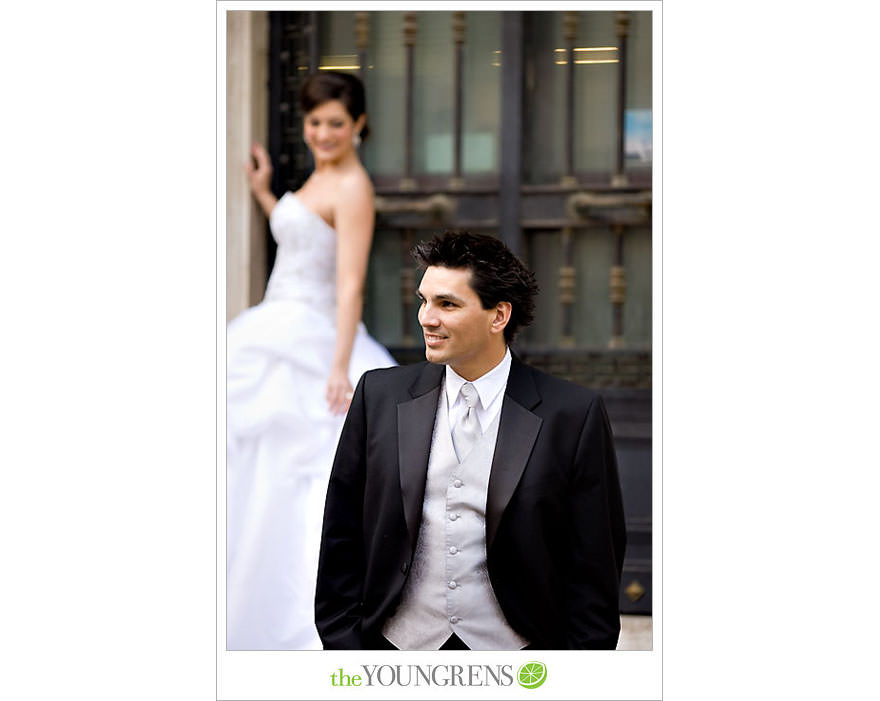 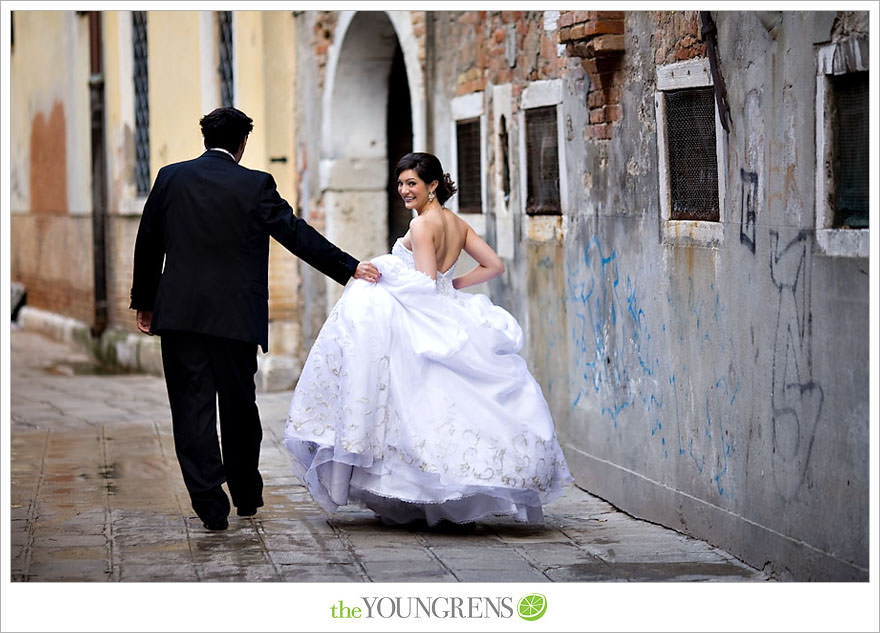 Just when we thought it didn’t get any better, a gondola floats by… 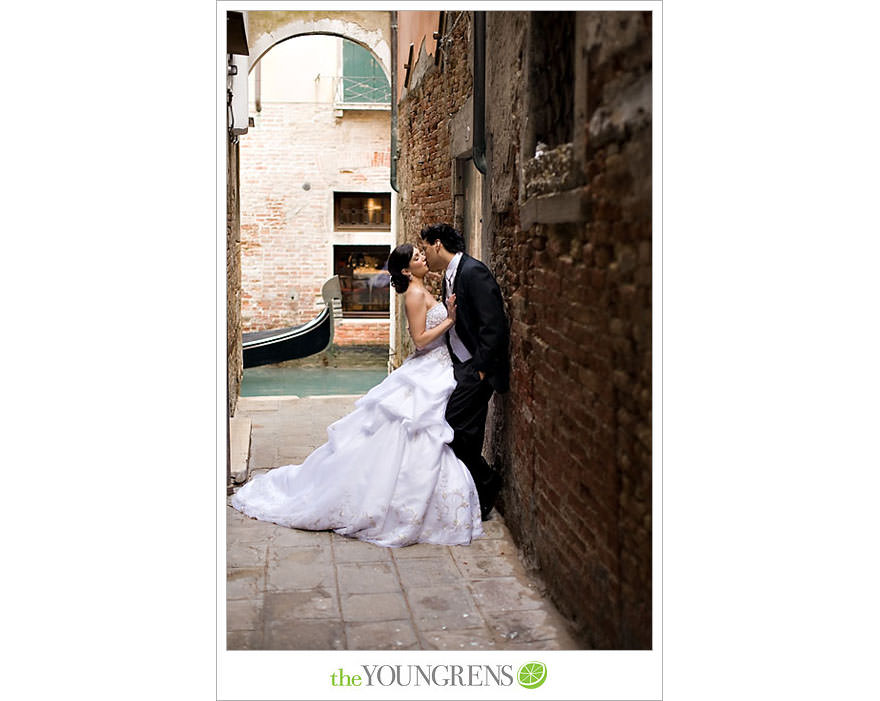 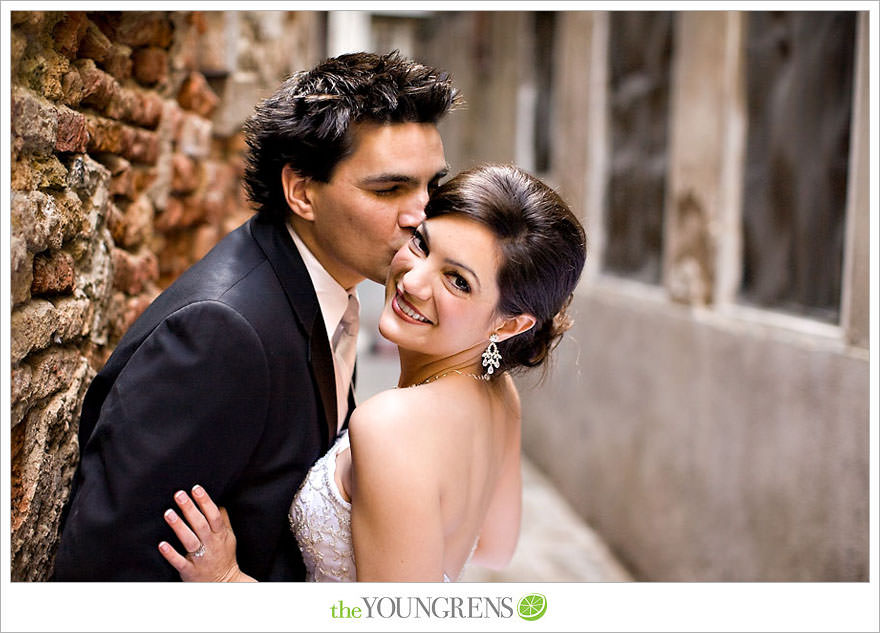 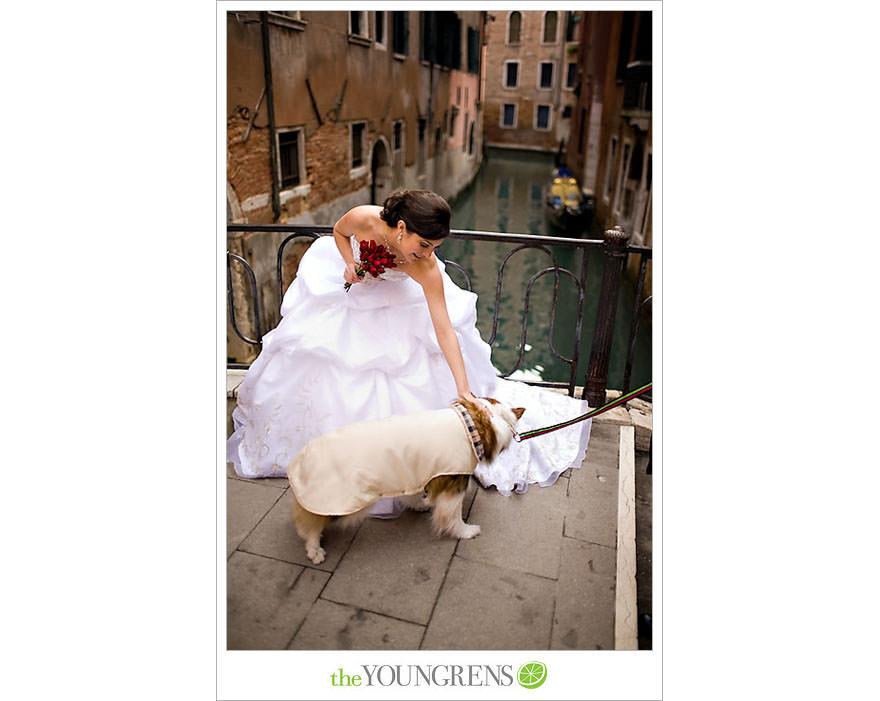 This is definitely a favorite. This is our ultimate Venice shot – the poles, the bridge, the canal, the balconies, the buildings, and of course the beautiful couple. 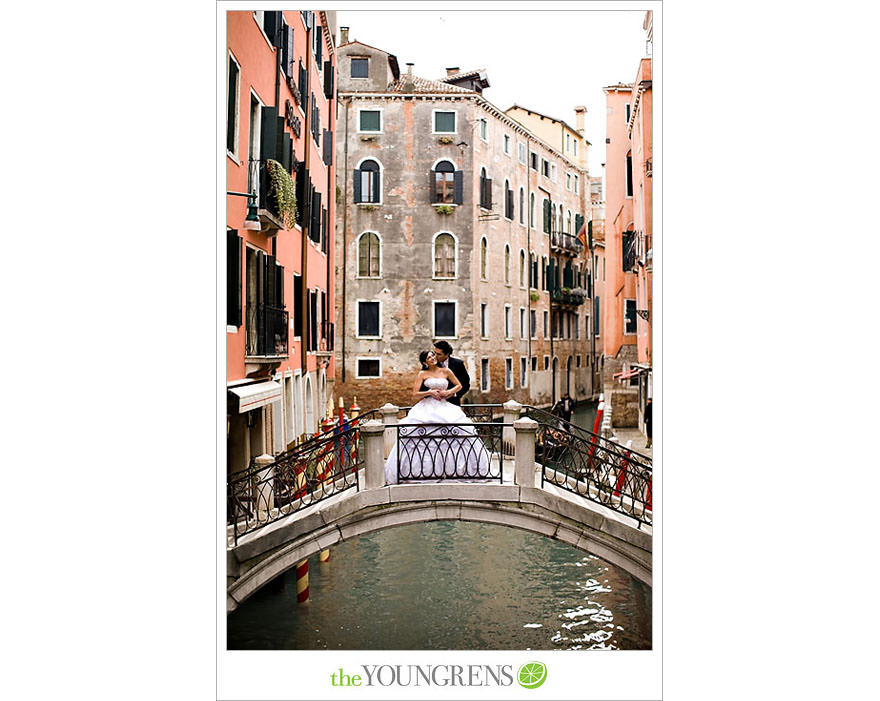 But my favorite part is Jeff taking the picture! A tour group happened to be walking by and stopped to watch! 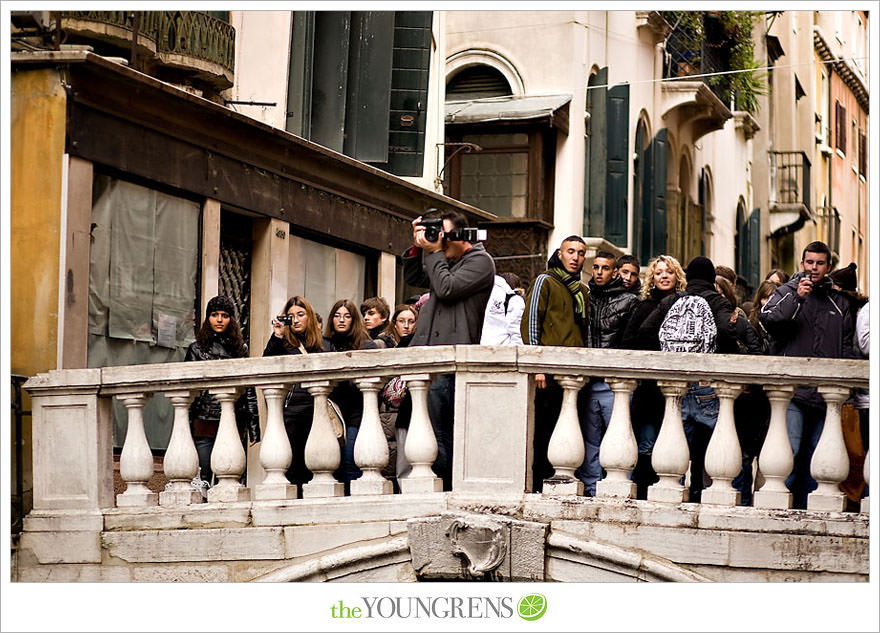 My view of the bridge. 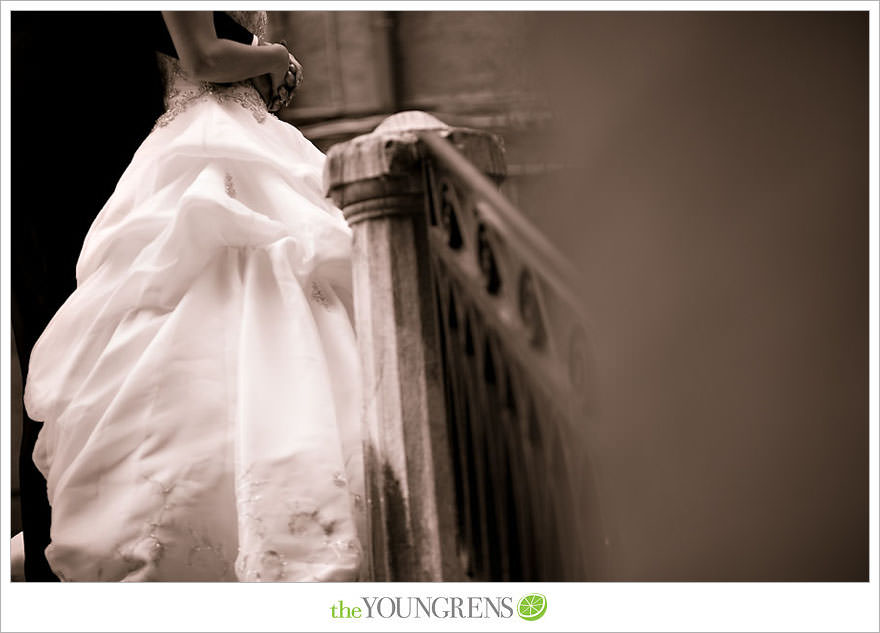 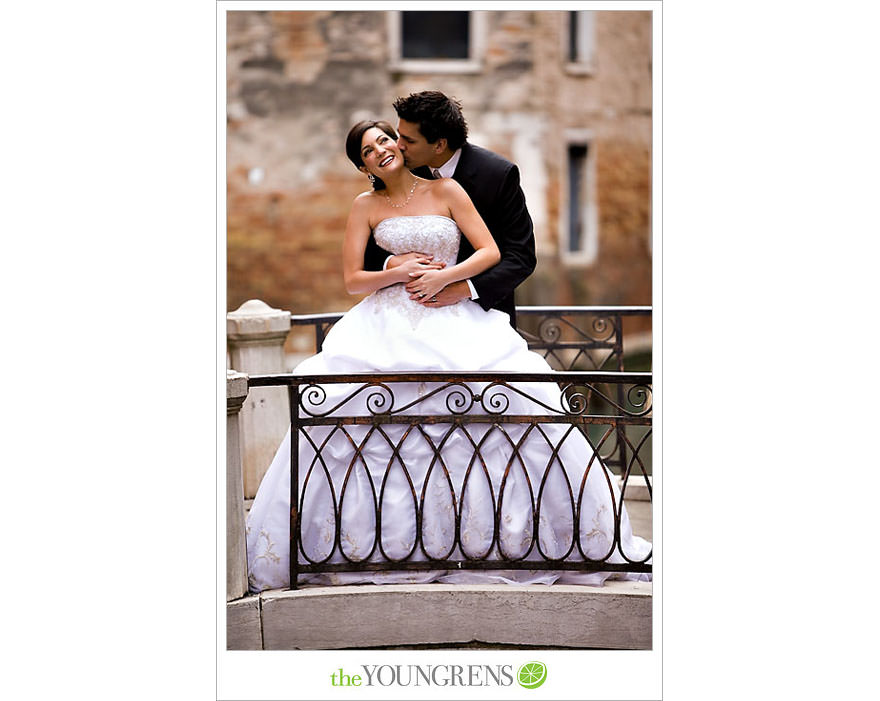 Ha! Everyone was having so much fun! 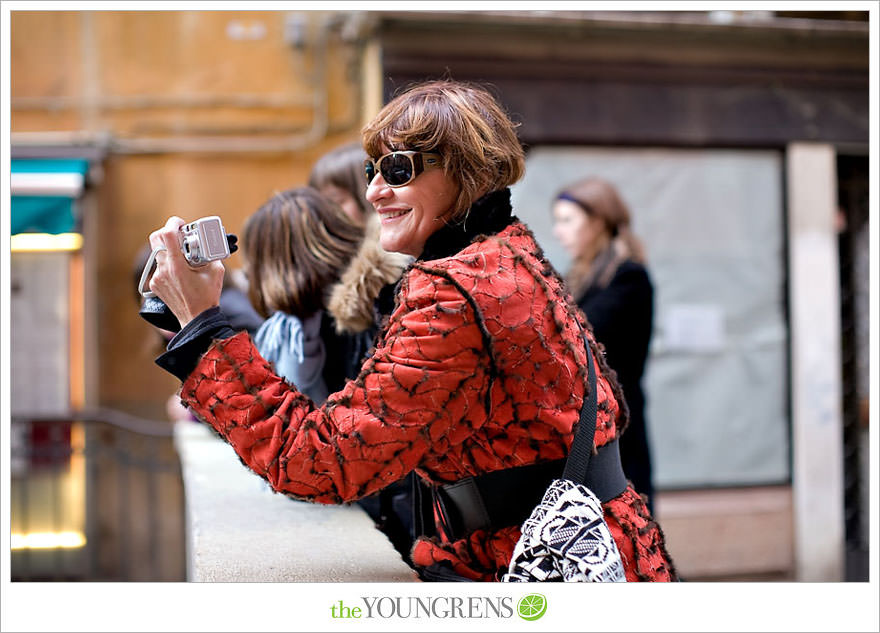 Stay tuned for the next installment of Venice pictures in the next few days! We can’t wait to show you, so I’ll just give you a hint…there’s definitely a gondola involved…