Jeff and I landed in LAX on Wednesday, which means we’ve been home for a couple of days now. This is the point in our trip where we do two things: (1) analyze just how well our bodies are doing with jetlag (“So am I tired because I’m bored, or because its 3:00am in Singapore?”) and (2) reminisce about everything we miss in Asia.

For example, Jeff and I were driving to an engagement session yesterday (yup, we’re already shooting. We define the term “hit the ground running”), and we drove past a KFC at which we have never eaten nor do we ever plan to. As we passed it, I groaned, “Awww! Look Jeff! It’s that one KFC!”

Jeff looked over and replied in his own groan, “Oh man, I miss KFC so much!”

In order to understand this story you need to understand that Southeast Asians love fried chicken. At least, this is what we gathered by the enormous number of Kentucky Fried Chicken restaurants and KFC knock-off restaurants that are strewn about the region. I’m not kidding. You would expect this of McDonald‘s or Starbucks or Burger King, which are on every street corner as well, but KFC? As in fried chicken and coleslaw? As in The Colonel?  Yup, the one and only. With any city or village we traveled to, we could count on finding a night market, a large amount of children selling us scarves, and at least one KFC. Many times right across the street from a Starbucks. So even though we never actually ate there during our two months, by the time our last weeks came around, we started craving popcorn chicken and biscuits with honey like crazy!

Anyways, now that we’re home for a few days, its time to pack up again. Over the next month, we’ll be in Las Vegas for WPPI and Chicago and Costa Rica for weddings. We won’t actually get to settle down at our house until we return in April. Still, I’m so excited to share some more images with you from our adventures, starting with yet another jewel from Erawan Falls in Kanchanaburi, Thailand. Let me know when you get sick of waterfalls ok? Thailand is so stinkin’ gorgeous that I could be poppin’ these things out for weeks! Kind of like popcorn chicken… 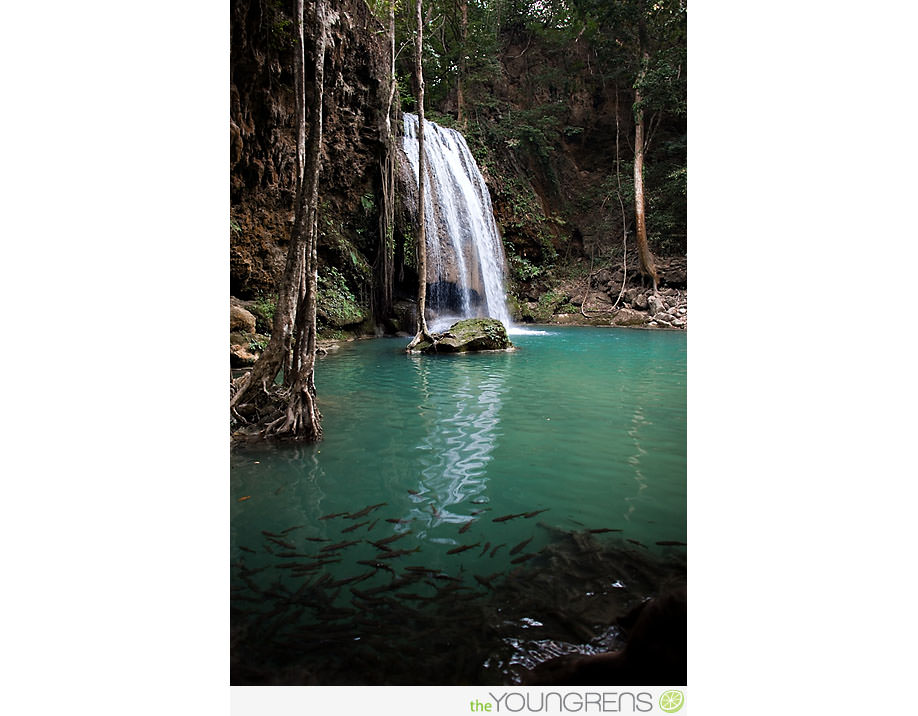 As always, we have a good friend of ours living at our house to take care of Gracie, so no need to worry about our poor kitty who doesn’t have any clue that we’re leaving again. Yes, we feel extremely guilty about it. We may never be able to have children if we feel this guilty about leaving a cat behind!