The word “quinoa” is one of those words like “hors d’oeuvres.” It took the longest time for me to put together the word I heard spoken all of the time with the word written on the page. The first time someone pointed out that “hors d’oeuvres” was spelled like it was, my whole world became crystal clear. It was like my days were brighter, my jeans fit better, and all of my acne disappeared into taught moisturized skin. I was all like, “Shut UP. That’s how you spell ordurve?!” It was mysterious and wonderful.

It’s the same with “quinoa.” When I finally realized that this written word and the one I heard all of the time from my hipster friends were the same thing, it was a total palm to the forehead kind of moment in the middle of Trader Joe’s. And now I love the stuff. And I love this recipe that the sweet Sara France sent my way. Not only is this salad incredibly fresh and bright, it’s probably the healthiest dish I’ve ever featured on Recipe Sunday. 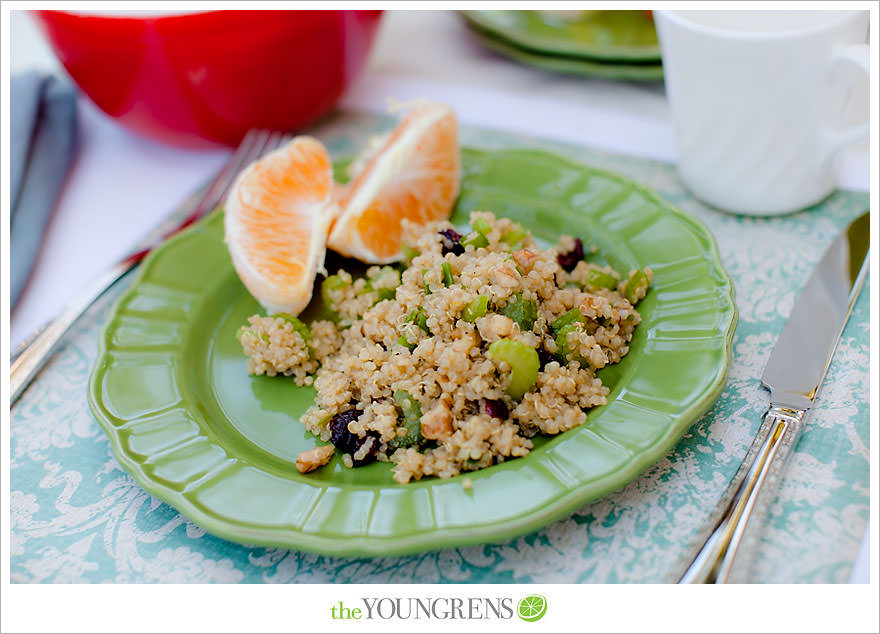 The main ingredients for this delightful dish are celery, scallions, dried cranberries, walnuts, and quinoa. You also need water or vegetable broth, but that doesn’t look as cool in the picture, so I left it out. 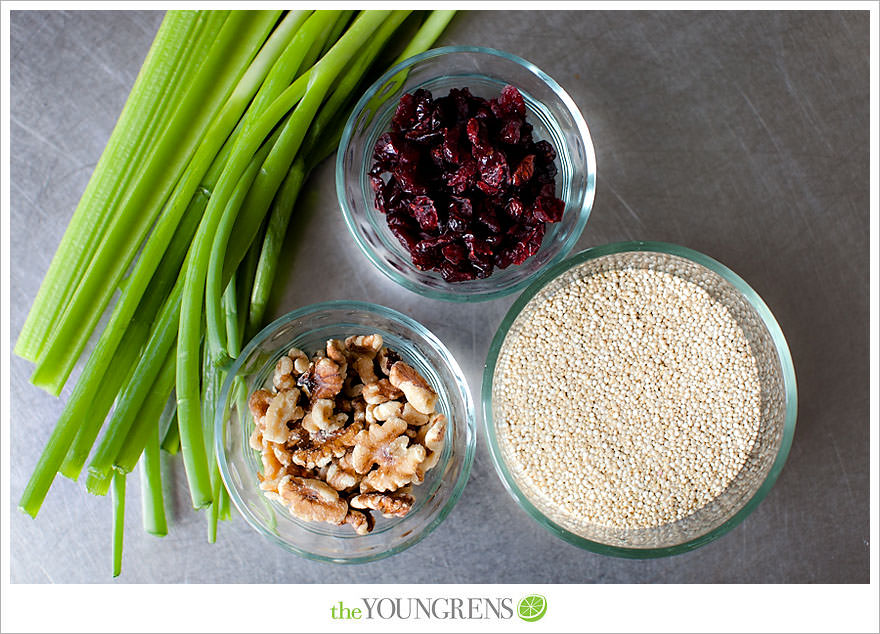 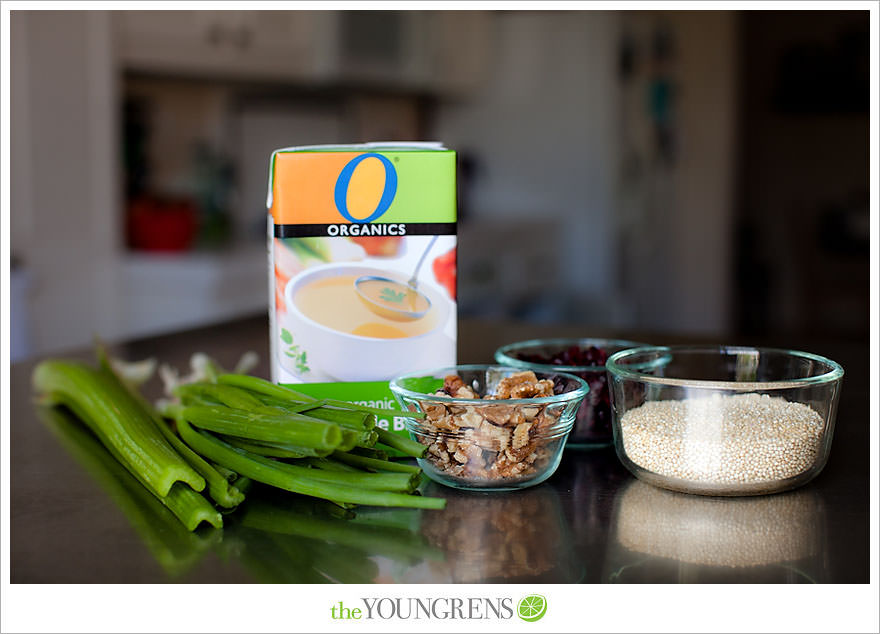 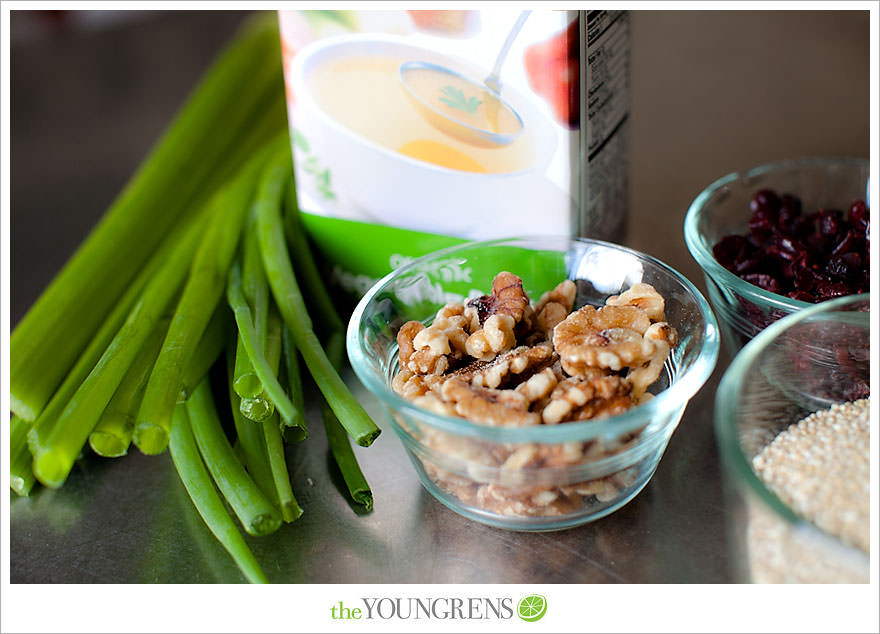 Start boiling your water/vegetable broth to cook the quinoa, then dice up your walnuts and greens into small bite-sized pieces. 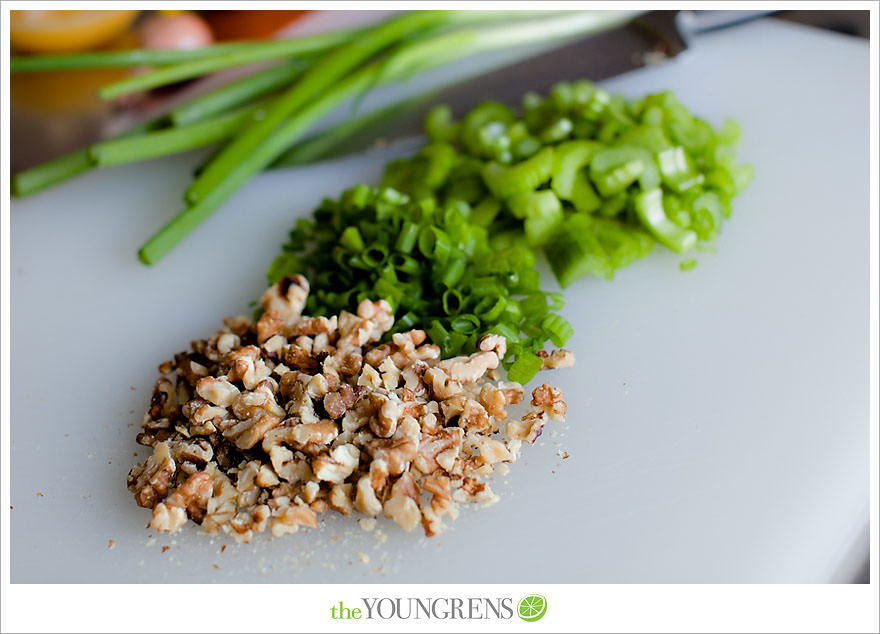 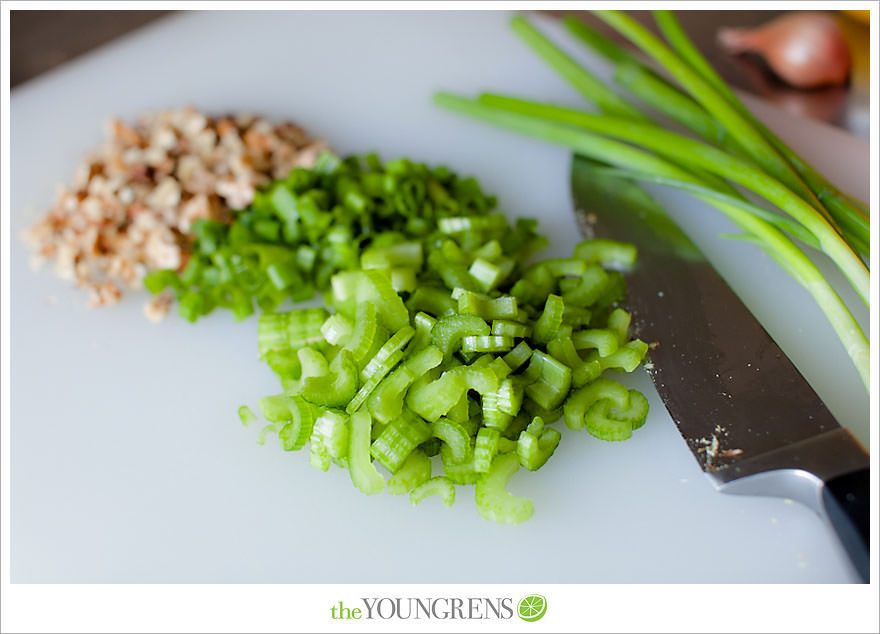 While the quinoa is cooking, prepare your orange dressing. You’ll need orange juice, orange zest, olive oil, and a shallot. During this recipe I also realized that I thought scallions and shallots were the same thing, so Google had to come to the rescue on that one. 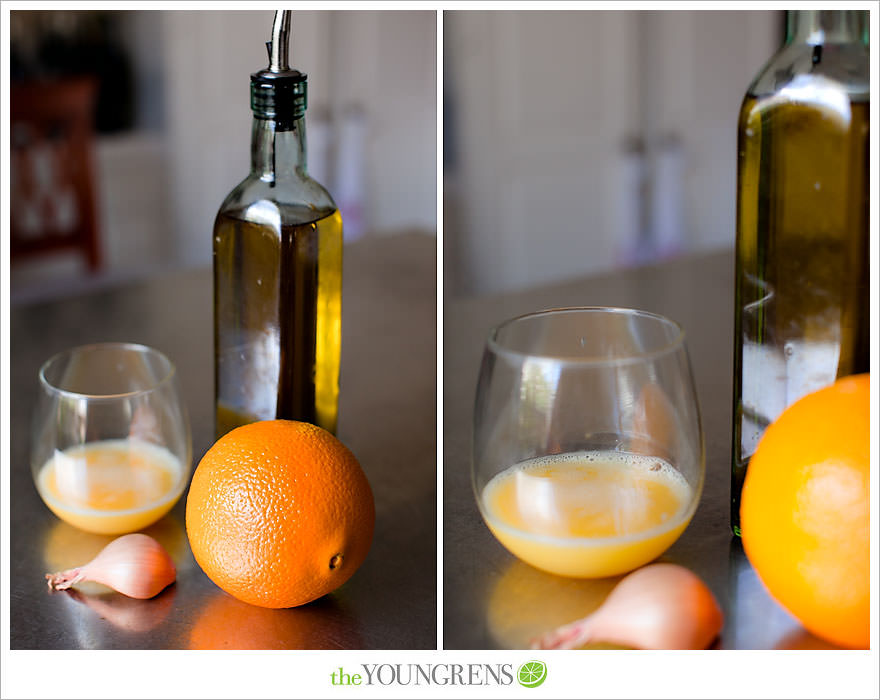 Whisk together all of your wet ingredients. 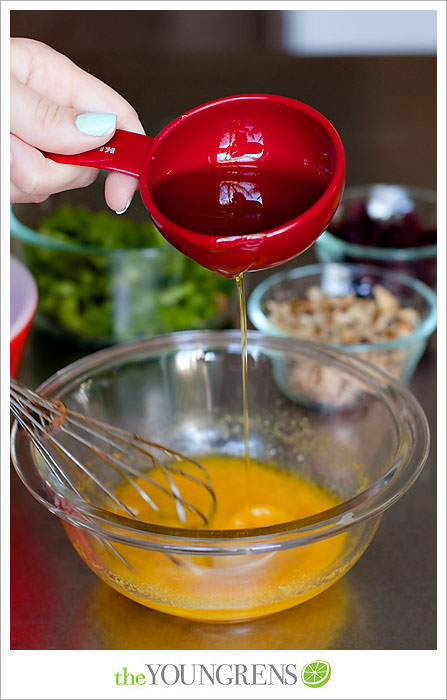 Once the quinoa is light and fluffy, mix in your dry ingredients. 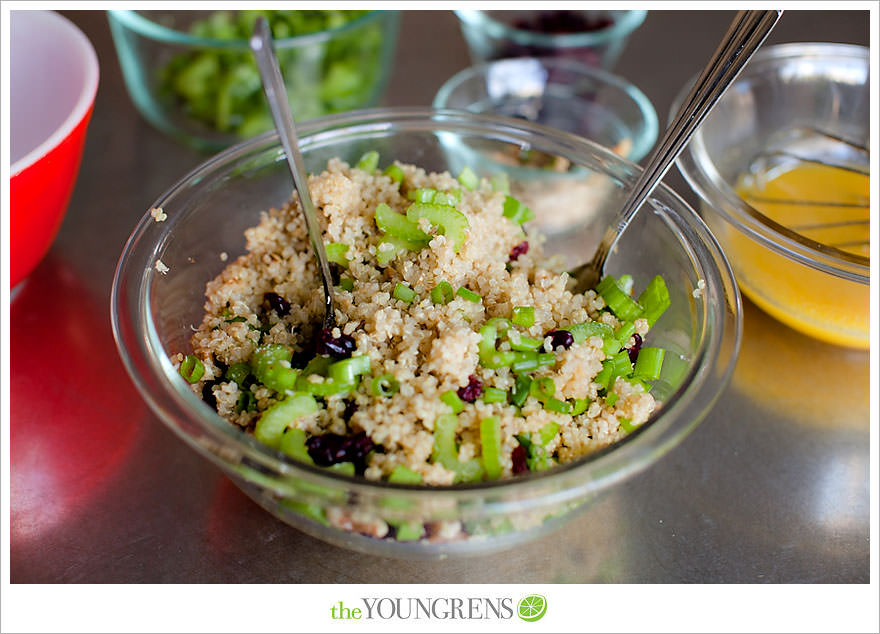 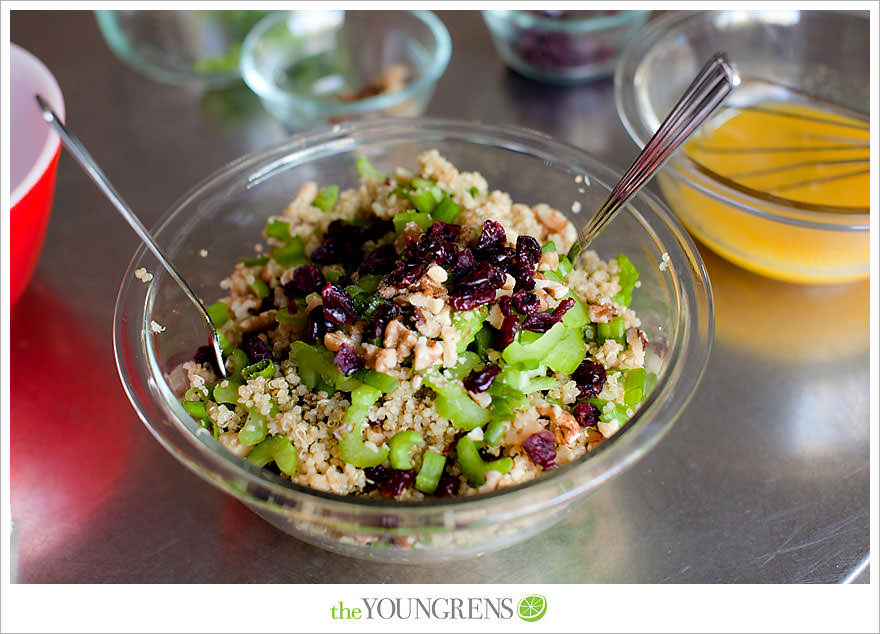 Then toss in the orange mixture to taste. This recipe makes extra, so feel free to store some in the fridge for other things. 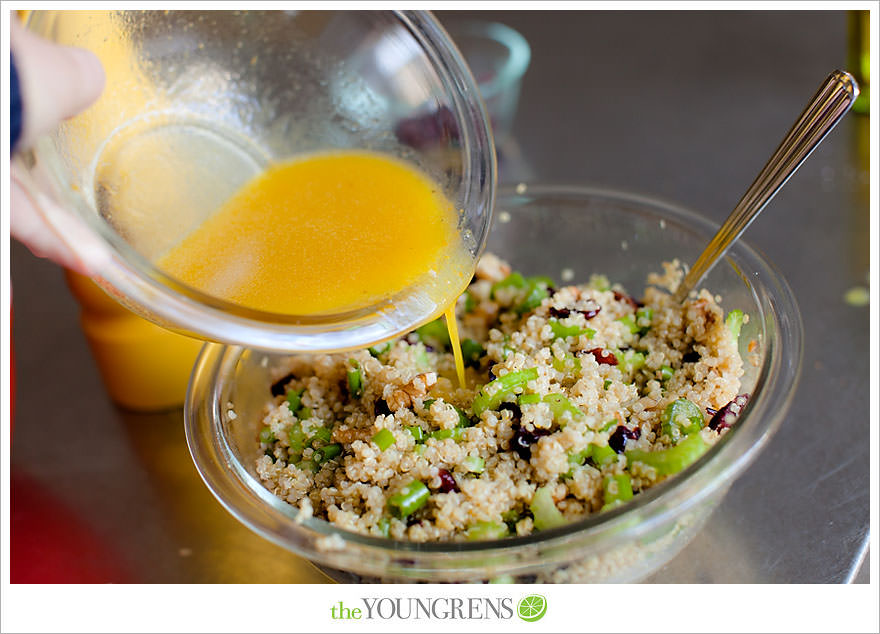 This salad is so easy and healthy, it’s pretty much ridiculous. It’s the perfect recipe to kick start summertime! 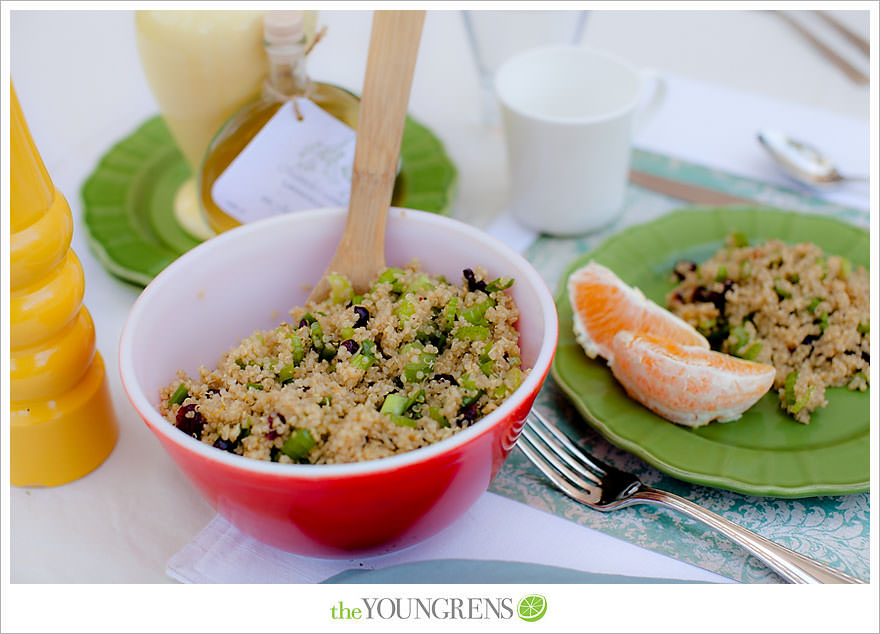 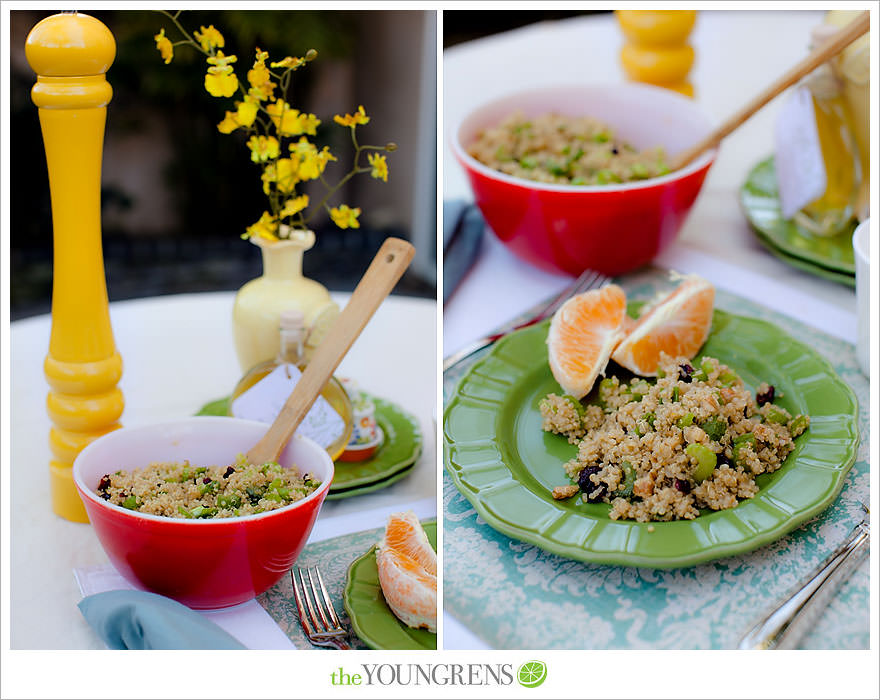 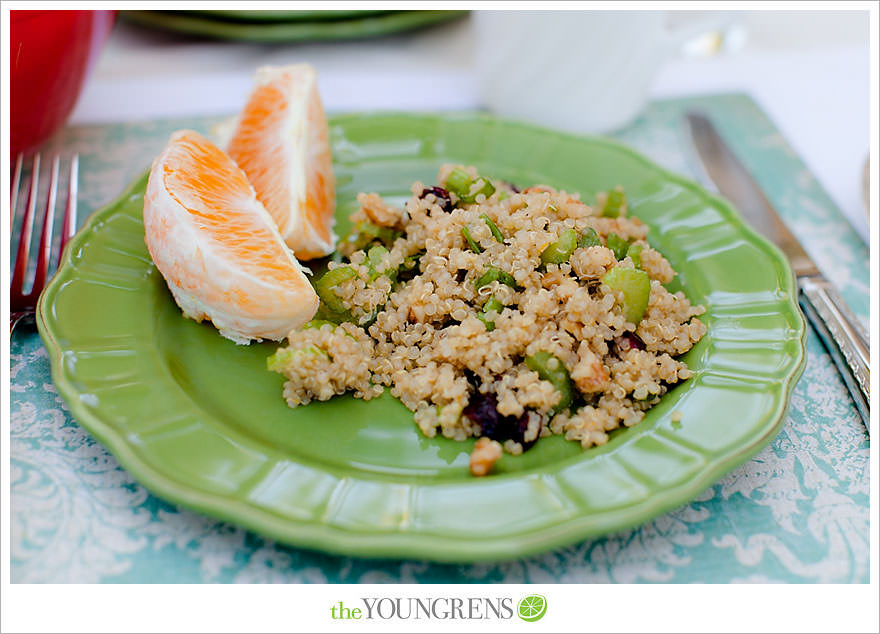 1. Bring the vegetable broth (or water) and a dash of salt to a boil.  Stir in the quinoa and bring it back up to boil then reduce to simmer.  Cover and let it cook until all the broth is absorbed (about 15 minutes.)  When done, the grain appears soft and translucent, and the germ ring will be visible along the outside edge of the grain.  Uncover and set aside to cool down.

3. Combine the quinoa with the rest of the salad ingredients and slowly add in about only half of the vinaigrette and season with salt and pepper to taste.  You may use less or more vinaigrette depends on your preference.  The left over vinaigrette may be used up to 1 week.