The Boots That Made Me Swear

It’s the only time that I’ve ever swore in front of my mother-in-law – at least I’m pretty sure it was.

It all took place last summer, after a really crazy month of shooting and traveling. Of stressing out about the messy house. Of laundry. Of album designs. Of blog posts and workflows. It was after planning Jeff’s birthday party. Of coordinating every detail, gathering RSVPs, ordering the food, cleaning the endless mess that is our house, and then – after weeks of planning ahead so that I wouldn’t be late with anything – being late to our very own party.

It was after cleaning the post-birthday party kitchen before heading out to shoot a fabulous wedding, and after waking up at 6am the morning after that wedding to pack our bags for – oh yeah – Australia for ten days. It was after working all day like a madwoman to complete my last few tasks on the Absolutely MUST Finish Before Leaving the Country for Ten Days to-do list. And then attempting to clean the house – again – so that my in-laws wouldn’t be completely horrified when they came to check on Gracie during our absence.

It was after my sweet mother-in-law arrived to take us to the airport and I had everything packed, ready to go, and was checking off that one last thing on my to-do list. I was feeling ok at that point. I felt good. Like I had gotten everything done and was leaving on a great note. And then Jeff asked me if we should pack another carry-on bag with some coats and our Uggs because Australia would be cold, and then he wanted to know where the iPhone charger was and why my phone was dying – didn’t I think to charge it beforehand? he asked.

It was right then, after shoving our coats and Uggs in the first suitcase I found, pulling a charger out of the wall, and stumbling to my boots to pull them on that I heard a big RIIIIIIIIIIIP. My heel was sticking out of a huge hole in the back of my boot.

And then I broke down. Huge heaping sobs came pouring out of my eyes like geysers, like horrible geysers that just couldn’t wait until I didn’t happen to be standing in front of people. It was like I had been holding back a flood of emotion for the previous four weeks, like a dam against a river, but the boots were the final crack in the cement to burst the entire thing and it started to flood everything – and everyone – around me.

But you know what the best thing was about a big rip in my favorite pair of boots? When Jeff took me by the hand, drove me to Nordstrom, and asked the salesman if there was a pair of boots that were good enough for his gorgeous wife. And when the salesman went into the back and pulled out the perfect pair that weren’t even on display.

And now, six months later, I get to walk around in those boots with his hand in mine knowing that we will walk together always, through the thick and the thin, the crazy and the calm. The crazy being me, by the way… 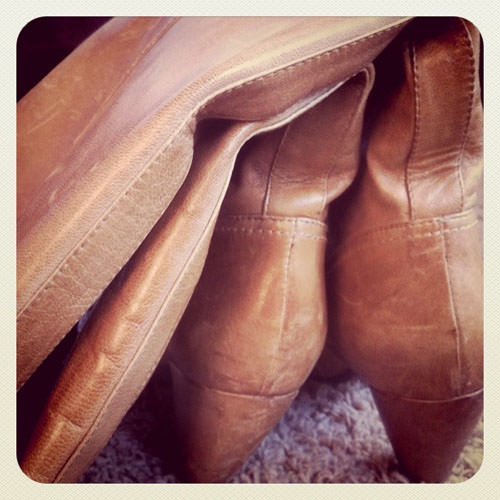