So this isn’t a typical post about kids in South East Asia. In a conversation I had with our guesthouse owner here in Cambodia yesterday, he mentioned that there are two “cliche traps” for traveling photographers: kids and monks. A monk in a temple is easy to find – especially in Siem Reap where Angkor Wat sits right down the street. Its like photographing a pig in a barn. Its gonna be there. Always. But find a monk with a laptop and an iPod – now that’s a photograph (thanks for the example Gordon).

Its the same with kids here. Photographing a somber child against a crumbling, impoverished backdrop isn’t hard to do. There are crumbling buildings and houses on stilts every five yards in these parts of the world, and yes, there are kids too. And the kids usually look sad because they’re staring back at the strange person with the big camera that’s staring at them first. So Erin and I are careful about what we photograph. We realize that photography comes second to actually experiencing the people and environment here. But sometimes, the kids come to you…

Last week Erin and I were in Mersing, Malaysia, for a night before heading out to Tioman Island for some beach time. We were hanging out with all the cool old boats, snapping photos of the colors and textures and rotten shipwrecks that they were, when I turned around and noticed a wooden walkway right across the street from us. It lead, like many other wooden walkways we have come to see since then, to some homes on stilts. As soon as I spotted it, I headed over and snapped this image. This is the first image I took and I was completely satisfied. I had no intention of photographing anything else as there were people enjoying their homes, and I was about to meander on. 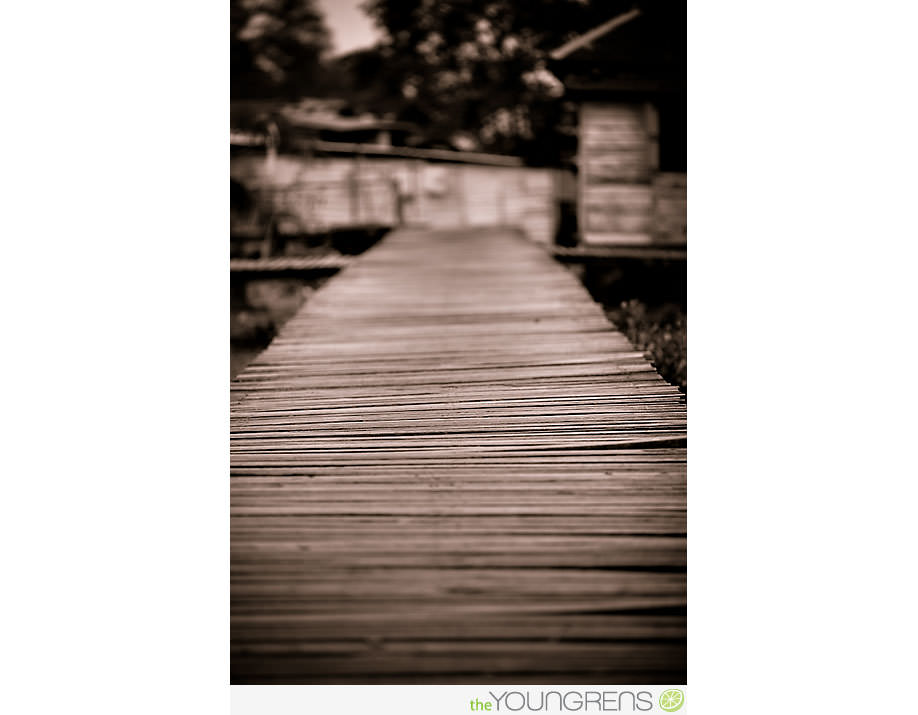 While I was checking the histogram of the image on my LCD screen (ok I was chimping), I heard a loud beep right behind me. I jumped out of the way, and a teenager on a scooter drove past me onto the bridge. 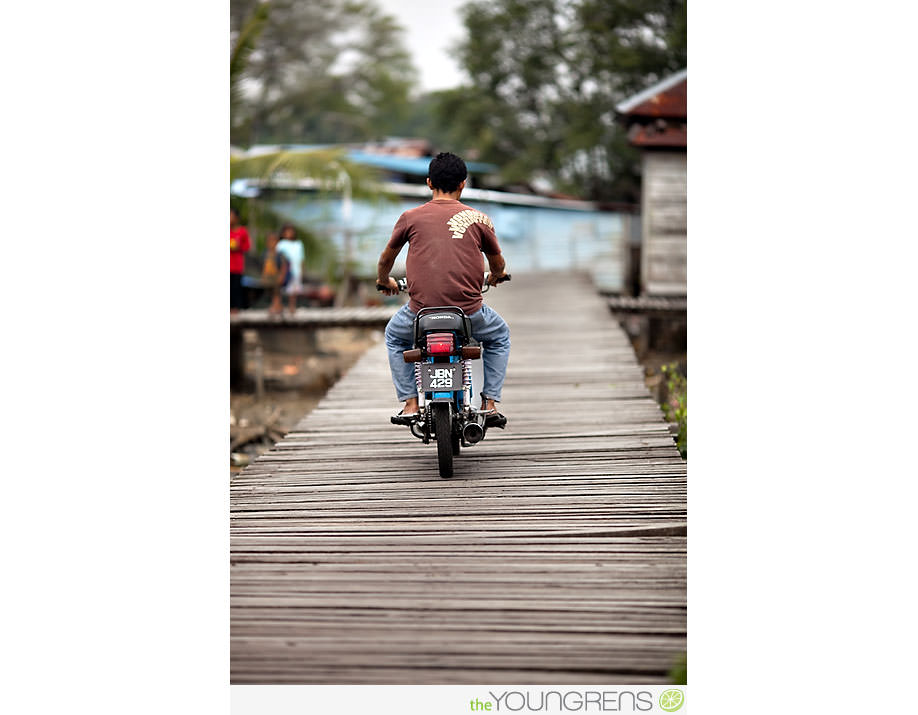 Then I noticed these kids hanging out, having fun with their little friend who was trying on a backpack. They were unaware of me for only a few seconds, and then they spotted me. 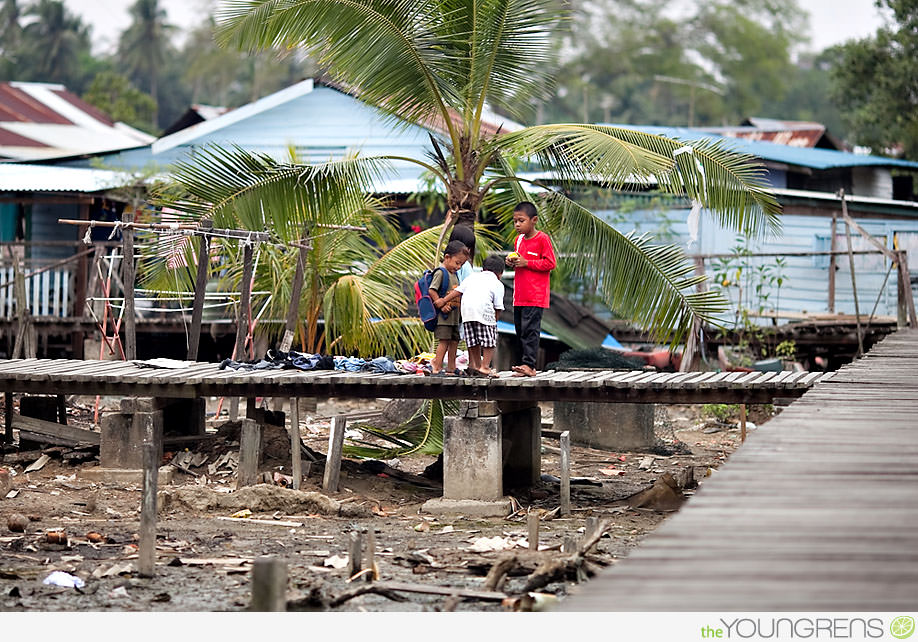 I got the sense that not a lot of tourists come to their part of town. To be honest, it was smelly and dirty and a bit of a walk from the main part of town with the hotels and restaurants. The only reason to even come to this village is to catch the ferry to the beautiful Tioman island off of the coast. No one stays. But when I waved at the kids and smiled, they started showing off. 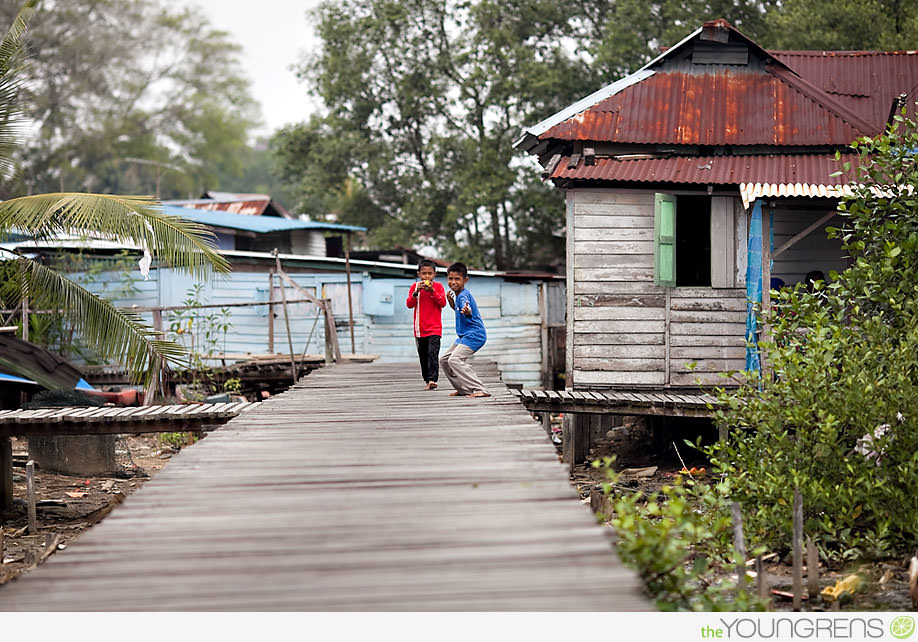 I waved hello at them again, and the little boy in the blue shirt ran toward me, immediately put his arm around me, and wanted to see what my camera was doing. After I showed him the walkway picture and he burst into a fit of laughter, he began pointing to things around us, telling me to take pictures, laughing at the image on the LCD. We took A BUNCH! This was when Erin noticed where I had wandered off to and captured the moment for me. 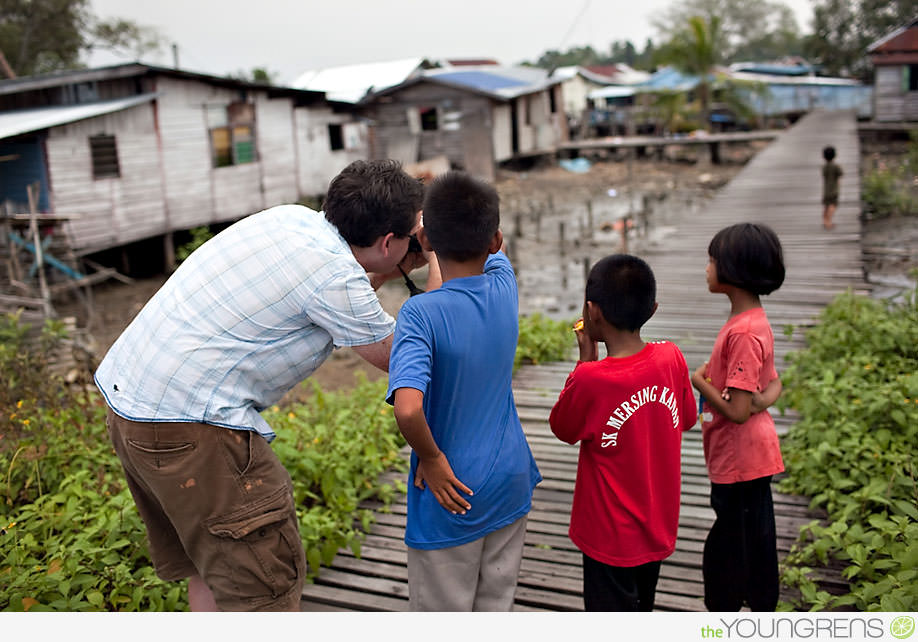 These kids were so sweet 🙂 When we started shooting some video on the 5D Mk II with the 135 f/2.0 they were LOVING it! It was hilarious!! 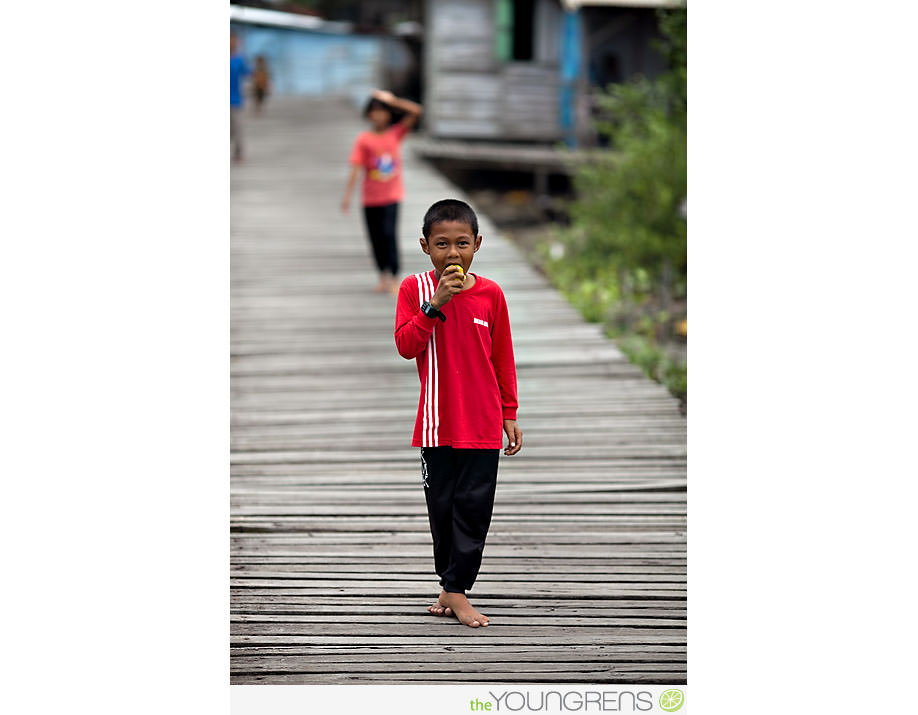 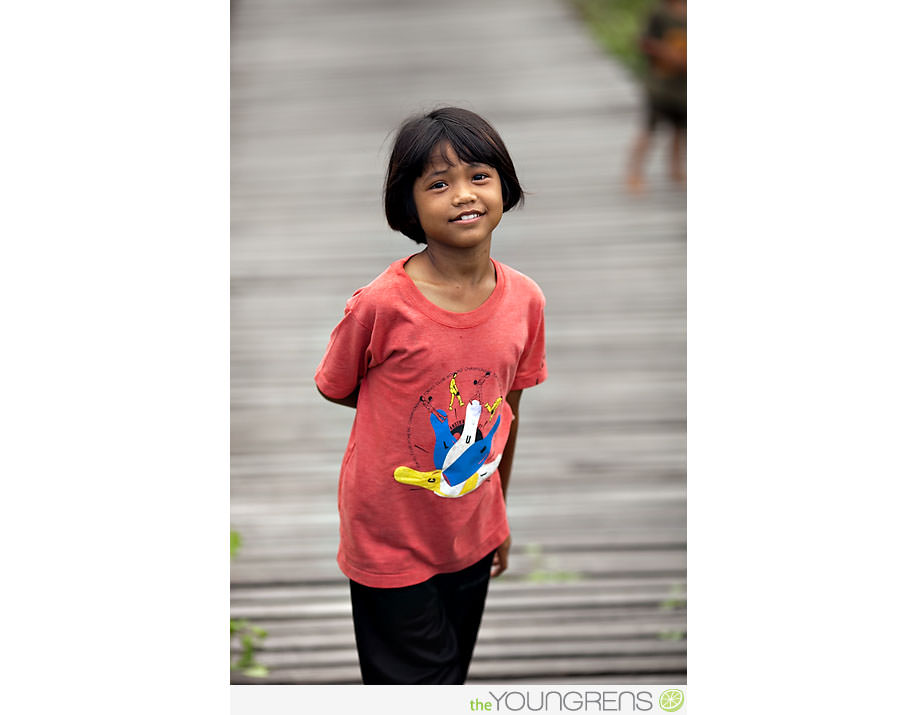 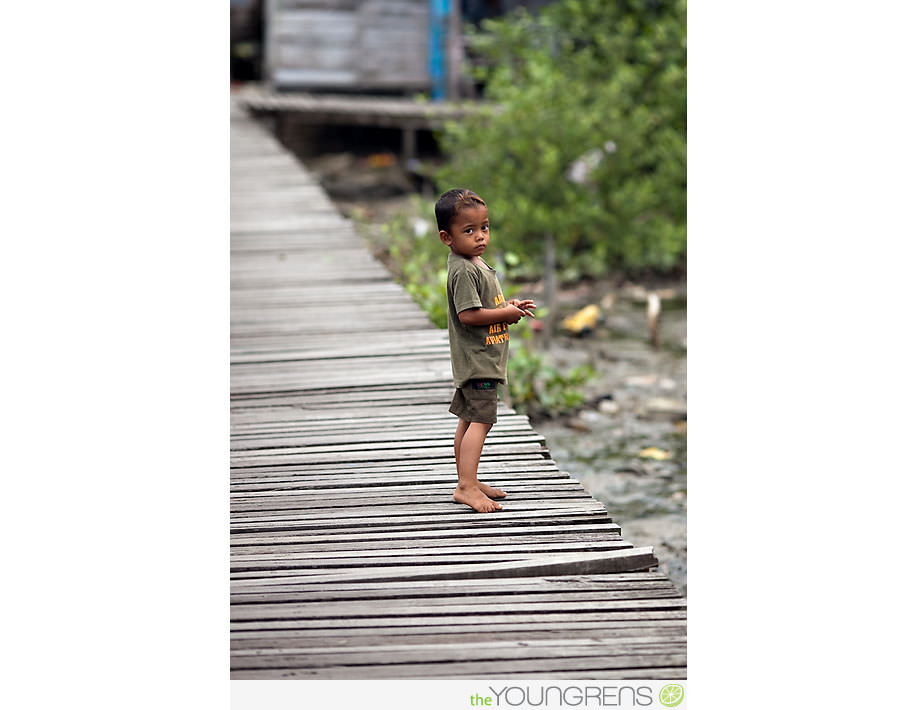 And then I snapped this image, which at this point is my favorite image I’ve taken thus far in SE Asia. While this kid maybe looks sad here, in reality, I think he’s just a little shy. I have to be completely honest and say that these kids seemed incredibly happy. Joyful. Exuberant. Everything a kid should be. I don’t want to discount that they are poor and that they live in a poor country with little opportunity, but I also don’t want to discount their laughter. Please don’t discount their laughter. 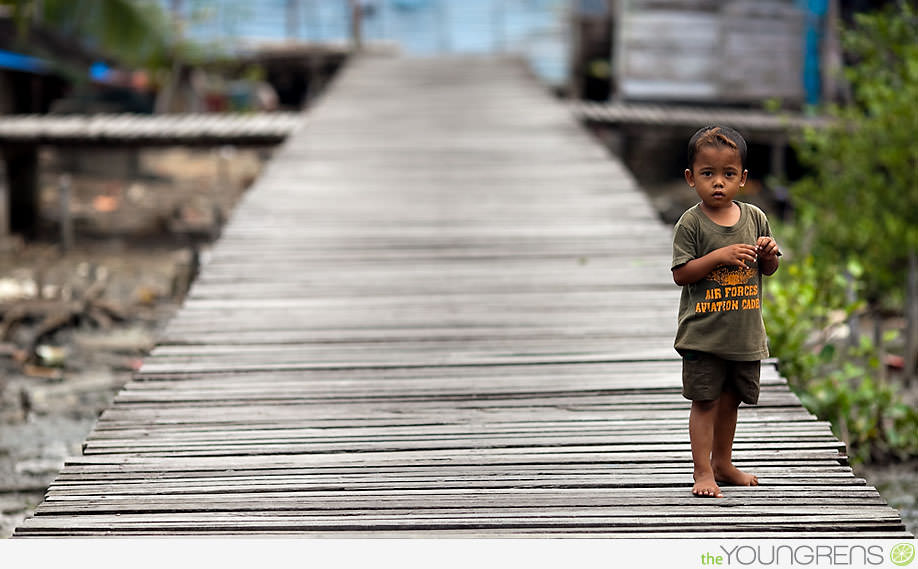