You know how there’s certain foods that feel and taste so good that it becomes one of those special, exotic treats that you wish your mother made everyday, but you also don’t wish they it made everyday because then it wouldn’t be special anymore?

Growing up, stuffing was that special, exotic treat for me, and it’s the dish that single-handedly made me love Thanksgiving. But my understanding of stuffing was that it was this labor intensive dish that took HOURS to make because we always made it inside the turkey. I thought that in order to have stuffing we had to roast a turkey along with it, so it was a rare holiday treat.

The day I found out that you can make stuffing from a box I just about died.

‘WHAAAAA!’ I thought. ‘I could be having stuffing ALL YEAR LONG.’

It was an intense moment. But like I said, if I actually ate stuffing all year long it would ruin the holiday (and pretty much ruin the waistline). So I’m a BIG fan of stuffing at Thanksgiving, and I really didn’t think it could get any better than the original poultry flavors, but Rachael Ray has proven me wrong once again. This Pumpkin Muffin Stuffin’ recipe from her Thanksgiving in 60 Minutes that we’re featuring here on the blog is sweet, crunchy, and moist – without having to stuff a bird. This stuffing is on the sweet, cinnamon side, so it compliments the spicy chipotle flavors of the rest of Rachael’s Thanksgiving menu. In fact, when you pour the crazy spicy Chipotle Gravy over this fall flavored stuffing, it’s pure heaven. 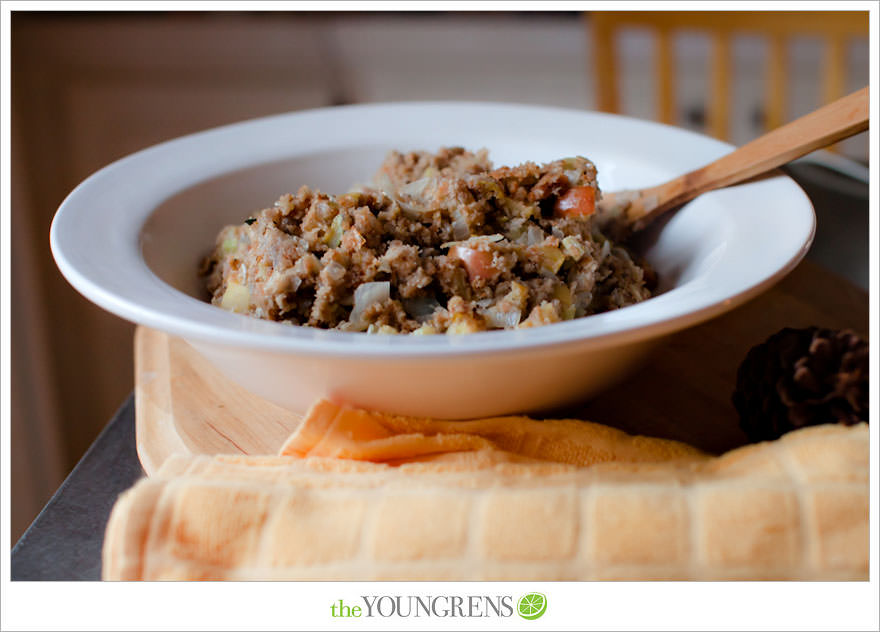 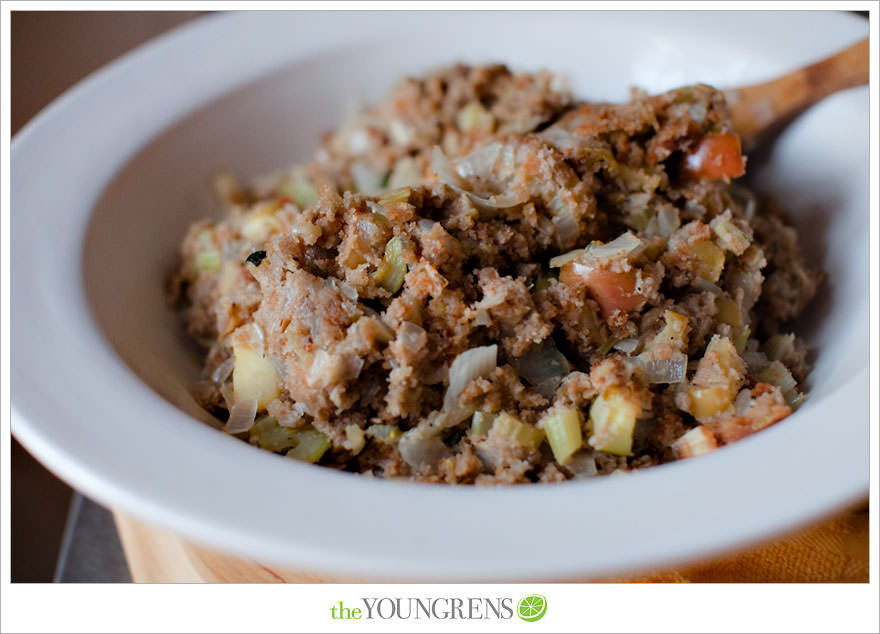 This stuffing doesn’t use dried bread – it uses pumpkin muffins and apples as the main flavors which are DYNAMITE. Sometimes I can’t find pumpkin muffins, so I opt for apple cinnamon muffins instead, which are a more typical daily option at most bakeries. 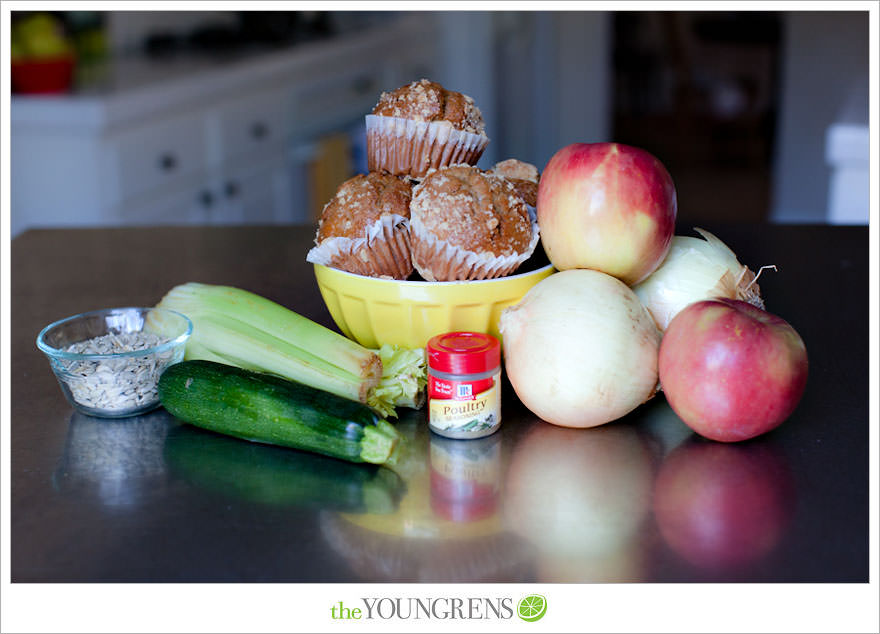 Chop up your veggies – celery, zucchini, onion, and McIntosh apples. 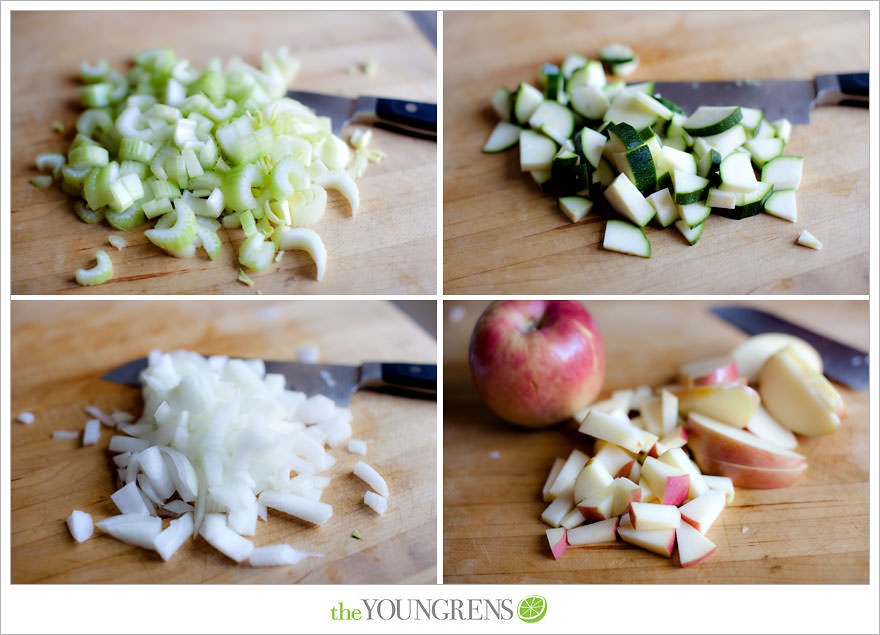 Then saute them with a dried bay leaf in 5 tablespoons of butter in a large, deep skillet until they’re soft. Season everything liberally with salt and pepper. And I mean liberally. The muffins tend to dampen down the flavor, so don’t be shy with the seasoning. 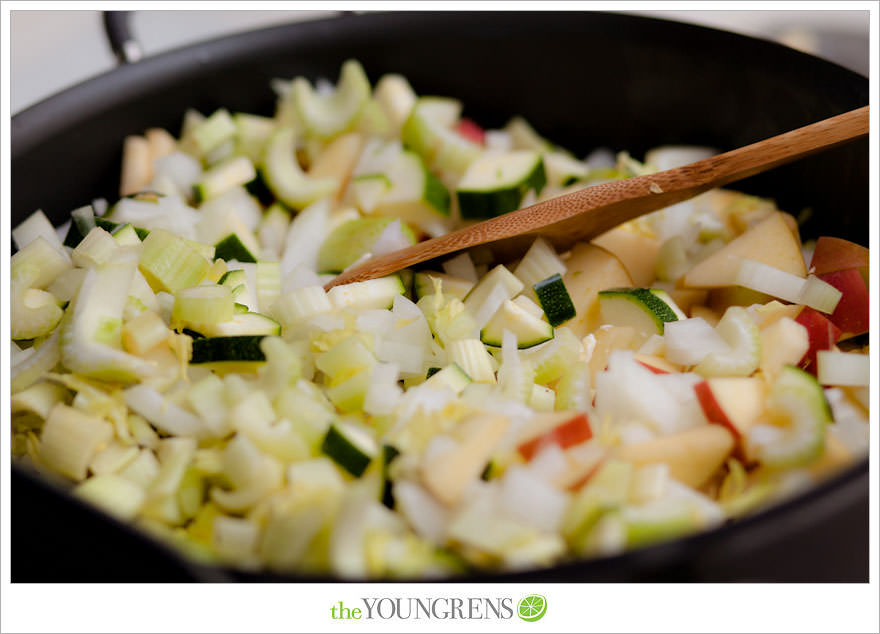 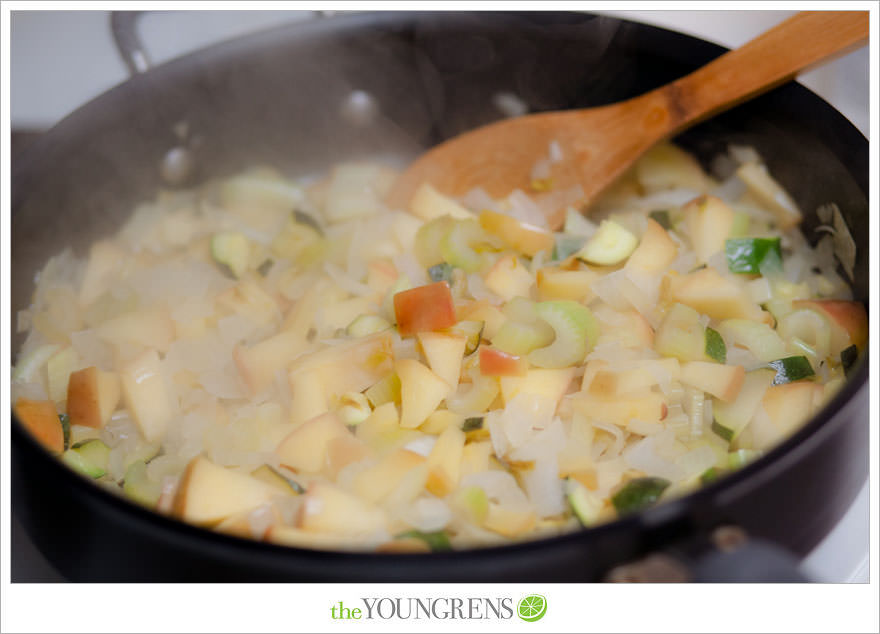 Crumble and add the muffins and sunflower seeds, then add poultry seasoning to taste. 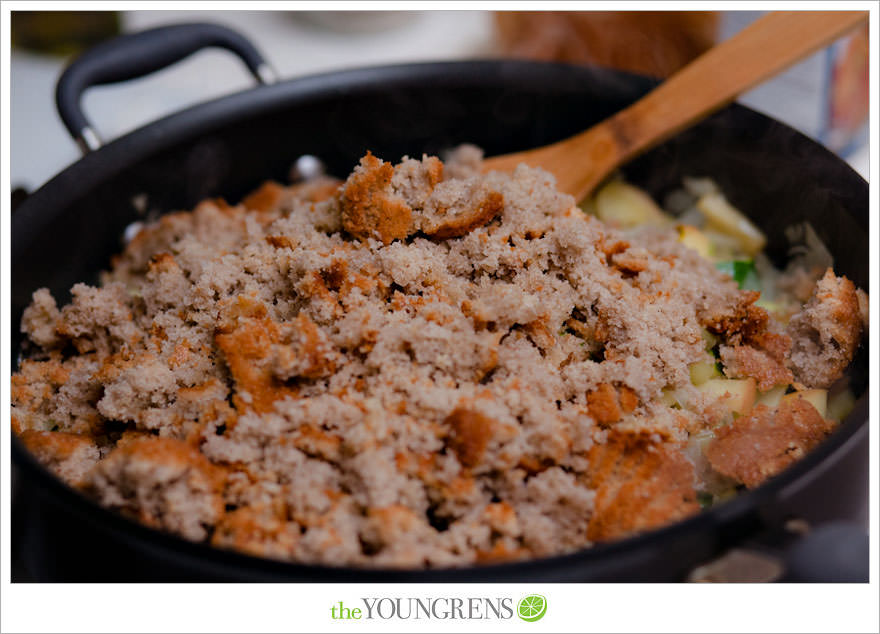 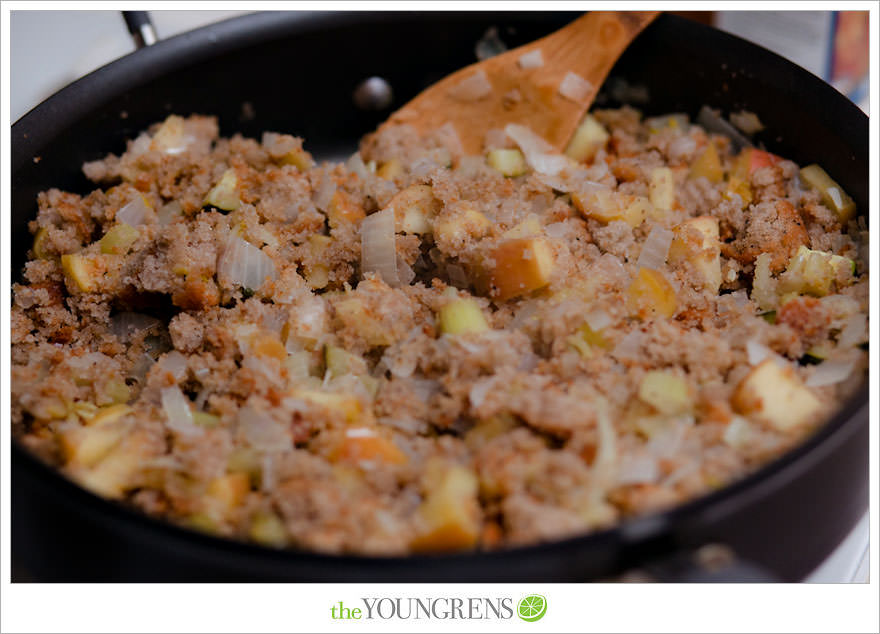 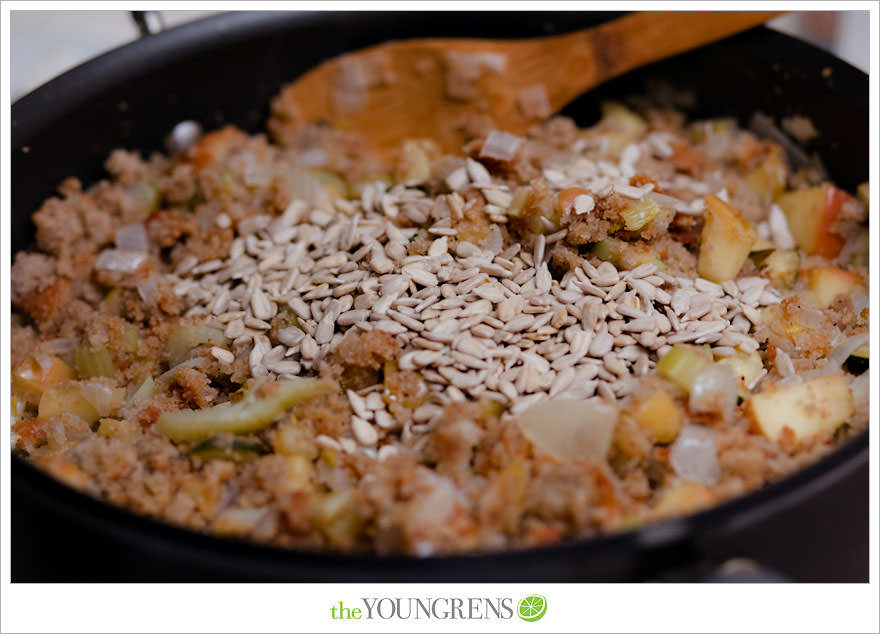 Dampen everything with 1 to 2 cups of chicken stock, or until it’s the moistness that you like. Pile everything into a big serving dish and place it in the oven next to your roasting Pressed Herbs and Spices Turkey Breast. It should only take a few minutes to crisp up along the top and heat through. 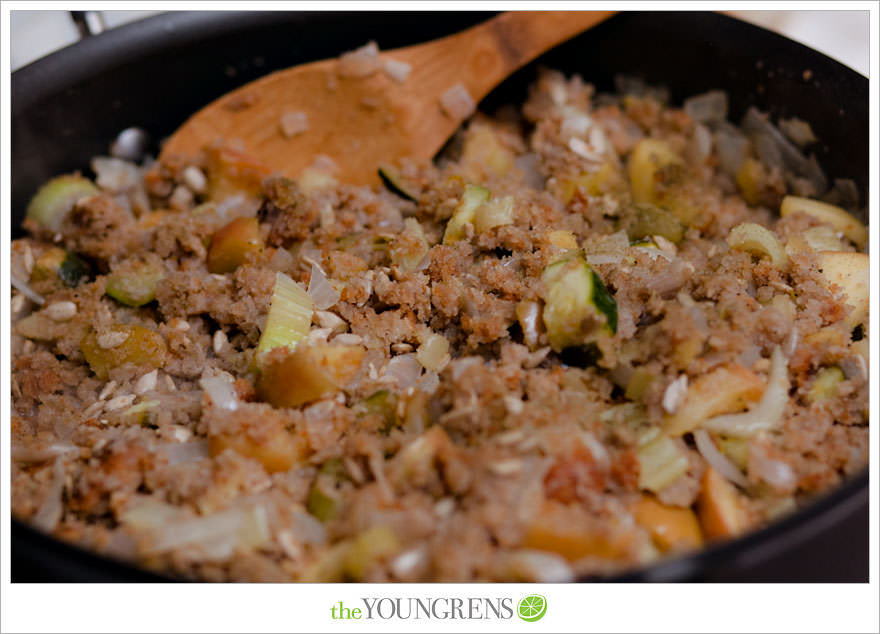 Yum, yum, and more yum! This stuffing is AMAZING. It takes Thanksgiving to a whole new level, and we never have a drop of leftovers because guest lick. the bowl. clean.

This stuffing with the Chipotle Gravy from Rachael Ray’s menu poured all over it will BLOW YOUR MIND. I’ve featuring the gravy in two weeks, so stay tuned! 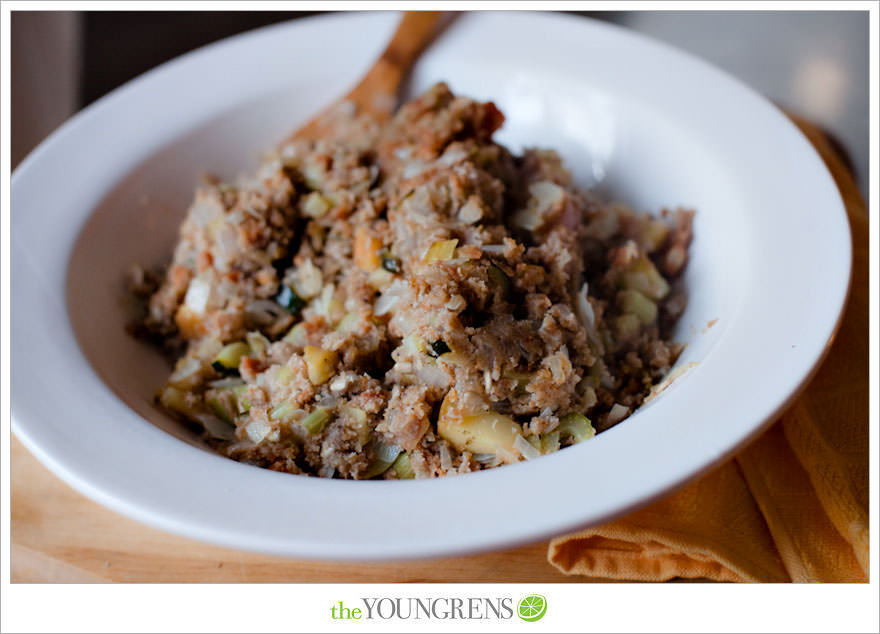 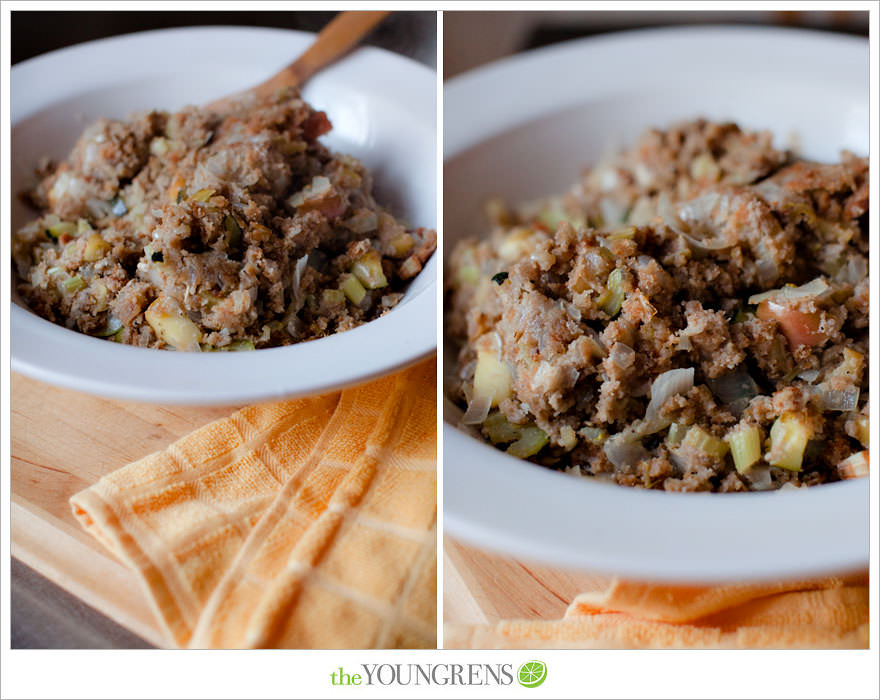 1. Heat a large, deep skillet over medium to medium-high heat with 5 tablespoons butter, cut into pieces. To melted butter, add bay, celery, apple, 1/2 of the onion and zucchini. Season the vegetables liberally with salt and pepper. Cook 10 minutes or until softened.

2. Add crumbled muffins and sunflower seeds to the pan and combine with the vegetables. Season the stuffing with poultry seasoning then adjust salt and pepper.

3. Dampen the stuffing with 1 1/2 to 2 cups of stock. Pile the stuffing into a serving dish. Place in oven to just crisp up the top along with turkey or, if the pan does not fit, when the turkey comes out, switch on the broiler and crisp the top of stuffing – it should only take a couple of minutes, tops.